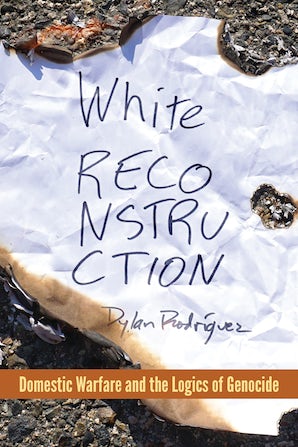 We are in the fray of another signature moment in the long history of the United States as a project of anti Black and racial–colonial violence. Long before November 2016, white nationalism, white terrorism, and white fascist statecraft proliferated. Thinking across a variety of archival, testimonial, visual, and activist texts—from Freedmen’s Bureau documents and the “Join LAPD” hiring campaign to Barry Goldwater’s hidden tattoo and the Pelican Bay prison strike—Dylan Rodríguez counter-narrates the long “post–civil rights” half-century as a period of White Reconstruction, in which the struggle to reassemble the ascendancy of White Being permeates the political and institutional logics of diversity, inclusion, formal equality, and “multiculturalist white supremacy.”

Throughout White Reconstruction, Rodríguez considers how the creative, imaginative, speculative collective labor of abolitionist praxis can displace and potentially destroy the ascendancy of White Being and Civilization in order to create possibilities for insurgent thriving.

As thoughtful as it is fierce, White Reconstruction is a pleasure for those of us who study and teach history. Refusing to imagine the historian’s concerns as at odds with those of the theorist, Rodríguez shows white supremacy reinventing its forms without losing sight of its imperatives. In consolidating slick new moments of control, rulers retain old modes of domination. Moments of multiculturalism and those of terror against vulnerable populations do not succeed, but instead structure, each other in this compelling study.---David Roediger, author of The Sinking Middle Class: A Political History,

Drawing from a deep reservoir of radical writing and activism, leading abolitionist thinker Dylan Rodríguez creatively frames the current multiculturalist moment as the latest stage of historical reconstructions of white domination. He astutely distinguishes anti-Blackness and racial–colonial power while demonstrating how they remain linked by global white supremacist aspirations and logics. White Reconstruction challenges us to think more radically both by eschewing reformist ideas and terms and by learning from the creative genius of liberationist insurgencies that call us to abolitionist struggle.---Dorothy Roberts, author of Killing the Black Body: Race, Reproduction, and the Meaning of Liberty,

Introduction: “The Cause Is Effect”: Inhabiting White Reconstruction | 1

2 “Let the Past Be Forgotten . . .”:
Remaking White Being, from Reconstruction to Pacification | 59

3 Goldwater’s Tribal Tattoo:
On Origins and Deletions of Post-Raciality | 107

4 “Civilization in Its Reddened Waters”:
Anti-Black, Racial-Colonial Genocide and the Logic of Evisceration | 135

5 “Mass Incarceration” as Misnomer:
Domestic War and the Narratives of Carceral Reform | 176

By (author) Dylan Rodríguez
Dylan Rodríguez is a teacher, scholar, and collaborator who works with and within abolitionist and other radical communities and movements. Since 2001, he has maintained a day job as a professor at the University of California, Riverside. His peers elected him President of the American Studies Association for 2020–2021, and in 2020 he was named to the inaugural class of Freedom Scholars. Dylan is the author of three books, including White Reconstruction: Domestic Warfare and the Logics of Racial Genocide (Fordham University Press, 2021) and Suspended Apocalypse: White Supremacy, Genocide, and the Filipino Condition (University of Minnesota Press, 2009).