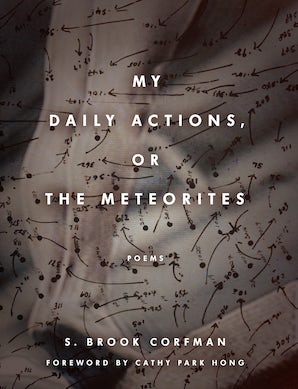 NAMED THE BEST POETRY OF 2020 BY THE NEW YORK TIMES

My Daily Actions, or The Meteorites is the result of a daily investigative writing practice, in which I was worried that a poem invested in the particulars of my life would be uninteresting—that the "ordinary" would be mundane. Instead memory, dreams, and the associative power of the imagination filled each moment with meaning, each tv show I watched or friend I spoke with, each outfit I wore or nail polish color I chose. In these poems, a combination of dread (for something approaching) and anxiety (for what might be approaching but isn't yet known) undid a sense of the present separate from climate change, global racial capitalism, whiteness, and gender-based violence, especially as I wrote as I tried to find out how my own gender fit into the world. The prose poem is the vehicle by which a recording practice ("journaling") meets the associative power of the poem.