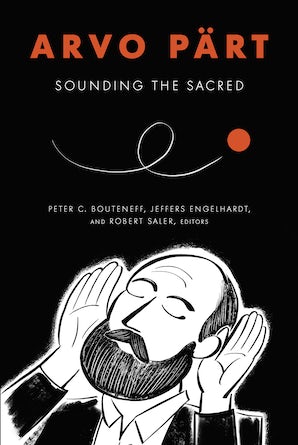 Description
Scholarly writing on the music of Arvo Pärt is situated primarily in the fields of musicology, cultural and media studies, and, more recently, in terms of theology/spirituality. Arvo Pärt: Sounding the Sacred focuses on the representational dimensions of Pärt’s music (including the trope of silence), writing and listening past the fact that its storied effects and affects are carried first and foremost as vibrations through air, impressing themselves on the human body. In response, this ambitiously interdisciplinary volume asks: What of sound and materiality as embodiments of the sacred, as historically specific artifacts, and as elements of creation deeply linked to the human sensorium in Pärt studies? In taking up these questions, the book “de-Platonizes” Pärt studies by demystifying the notion of a single “Pärt sound.” It offers innovative, critical analyses of the historical contexts of Pärt’s experimentation, medievalism, and diverse creative work; it re-sounds the acoustic, theological, and representational grounds of silence in Pärt’s music; it listens with critical openness to the intersections of theology, sacred texts, and spirituality in Pärt’s music; and it positions sensing, performing bodies at the center of musical experience. Building on the conventional score-, biography-, and media-based approaches, this volume reframes Pärt studies around the materiality of sound, its sacredness, and its embodied resonances within secular spaces.
Authors & Distributors
Peter C. Bouteneff (Edited By)
Peter C. Bouteneff is Professor of Systematic Theology at St. Vladimir’s Orthodox Theological Seminary, where he also directs the Institute of Sacred Arts and the Arvo Pärt Project. He is the author of Arvo Pärt: Out of Silence (SVS Press, 2015).

Jeffers Engelhardt (Edited By)
Jeffers Engelhardt is Associate Professor of Music at Amherst College. His research deals broadly with music, religion, European identity, and media. His books include Singing the Right Way: Orthodox Christians and Secular Enchantment in Estonia (Oxford, 2015) and the co-edited volume Resounding Transcendence: Transitions in Music, Religion, and Ritual (Oxford, 2016).

Robert Saler (Edited By)
Robert Saler is Research Professor of Religion and Culture and Associate Dean at Christian Theological Seminary in Indianapolis, where he also serves as Executive Director of the Center for Pastoral Excellence. He is the author of Between Magisterium and Marketplace (Fortress, 2014), Theologia Crucis (Cascade, 2016), and All These Things into Position: What Theology Can Learn from Radiohead (Cascade, 2019).

This is a thorough and impressive attempt to challenge de-materialised readings of Pärt’s music, concentrating especially on the sheer physicality of sound and hearing. It is likely to set new directions in studies of this beguiling composer, and open up fresh avenues in the wider field of music and theology. - Jeremy Begbie, Duke University

6. The Pärt Sound | 89
Paul Hillier, in conversation with Peter Bouteneff

IV. Materiality and Phenomenology
8. Vibrating, and Silent: Listening to the Material Acoustics of Tintinnabulation | 129
Jeffers Engelhardt

10. The Piano and the Performing Body in the Music of Arvo Pärt: Phenomenological Perspectives | 177
Maria Cizmic and Adriana Helbig

V. Theology
11. Presence, Absence, and the Ambiguities of Ambiance:
Theological Discourse and the Move to Sound in Pärt Studies | 197
Robert Saler

12. The Materiality of Sound and the Theology of the Incarnation in the Music of Arvo Pärt | 208
Ivan Moody

14. In the Beginning There Was Sound: Hearing, Tintinnabuli, and Musical Meaning in Sufism | 232
Sevin Huriye Yaraman

Works by Other Composers | 256

Contributions: Andrew Albin
Andrew Albin is Associate Professor of English and Medieval Studies at Fordham University. His scholarship in the fi eld of historical sound studies examines embodied listening practices, sound’s meaningful contexts, and the lived aural experiences of historical hearers—in a word, the sonorous past—as an object of critical inquiry. His work has been recognized with grants and fellowships from the American Council of Learned Societies, the Medieval Academy of America, the Pontifical Institute of Mediaeval Studies, and the Yale Institute of Sacred Music. He is the author of Richard Rolle’s Melody of Love: A Study and Translation with Manuscript and Musical Contexts (PIMS, 2018).

Contributions: Peter C. Bouteneff
Peter C. Bouteneff is Professor of Systematic Theology at St. Vladimir’s Orthodox Theological Seminary, where he also directs the Institute of Sacred Arts and the Arvo Pärt Project. He is the author of Arvo Pärt: Out of Silence (SVS Press, 2015).

Contributions: Maria Cizmic
Maria Cizmic is Associate Professor in the Humanities and Cultural Studies Department at the University of South Florida, where she teaches courses that integrate musicology into an interdisciplinary curriculum. She is author of Performing Pain: Music and Trauma in Eastern Europe (Oxford, 2012). In addition to music and trauma studies during the late socialist period, her areas of research and teaching include twentieth-century American experimental and popular music; film music; disability studies; and performance, technology, and mediation. Her work can also befound in Twentieth-Century Music, American Music, and Music, Sound, and the Moving Image.

Contributions: Adriana Helbig
Adriana Helbig is an Associate Professor of Music at the University of Pittsburgh, where she teaches courses on global hip- hop, music and disability studies, and prison sounds. A recipient of fellowships from the American Council of Learned Societies, National Endowment for the Humanities, American Councils for International Education, IREX, and Fulbright, she has focused her research on issues relating to music and human rights. Her books include Hip Hop Ukraine: Music, Race, and African Migration (Indiana University Press, 2014), Hip Hop at Europe’s Edge: Music, Agency, and Social Change, coedited with Milosz Miszczynski (Indiana University Press, 2017), and ReSounding Poverty: Romani Music and Development Aid (forthcoming).

Contributions: Paul Hillier
Paul Hillier’s career has embraced singing, conducting, and writing about music. He was founding director of the Hilliard Ensemble and subsequently founded Theatre of Voices. He was Principal Conductor of the Estonian Philharmonic Chamber Choir (2001–2007) and has been Chief Conductor of Ars Nova Copenhagen since 2003. His recordings, consisting of over a hundred CDs, including seven solo recitals, have earned worldwide acclaim. Arvo Pärt has dedicated two of his compositions to Hillier, who in turn has made premiere recordings of several Pärt works. His books about Arvo Pärt and Steve Reich, together with numerous anthologies of choral music, are published by Oxford University Press. In 2006 he was awarded an OBE for services to choral music.

Contributions: Kevin Karnes
Kevin C. Karnes is Professor of Music and Vice Provost for the Arts at Emory University (Atlanta). His research explores sounding expressions of identity, difference, and belonging in Eastern and Central Europe from the nineteenth century to the present. His published work includes Arvo Pärt’s Tabula Rasa (Oxford, 2017), Jewish Folk Songs from the Baltics: Selections from the Melngailis Collection (A- R Editions, 2014), and Baltic Musics/Baltic Musicologies: The Landscape since 1991 (with Joachim Braun, Routledge, 2009). He is currently working on a new book, Sounds Beyond: Arvo Pärt and the 1970s Soviet Underground, and serving as Editor-in-Chief of the Journal of the American Musicological Society.

Contributions: Alexander Lingas
Alexander Lingas is a Professor of Music at City, University of London, founder and Musical Director of the vocal ensemble Cappella Romana, and a Fellow of the University of Oxford’s European Humanities Research Centre. His present work embraces historical study, ethnography, and performance. In 2018, His All-Holiness, Bartholomew I, Archbishop of Constantinople–New Rome and Ecumenical Patriarch, bestowed on him the title of Archon Mousikodidaskalos.

Contributions: Christopher May
Christopher J. May completed his doctorate in musicology at Oxford University in 2016. His dissertation examined a number of prominent critical frameworks for Pärt’s music and sought especially to reconcile analytical and experiential accounts of tintinnabuli. In 2015 and 2016 he was the recipient of visiting studentships at the Estonian Academy of Music and Theatre. He holds a law degree from the University of Sydney, and his other research interests include music copyright law.

Contributions: Ivan Moody
Ivan Moody, a world-renowned composer and conductor, is also a researcher at CESEM Universidade Nova, Lisbon, and Founding Chairman of the International Society for Orthodox Church Music. He was Professor of Church Music at the University of Eastern Finland from 2012 to 2014. He is a contributor to the revised edition of The New Grove Dictionary of Music, The Canterbury Dictionary of Hymnology, Musik in Geschichte und Gegenwart, and the forthcoming Cambridge Stravinsky Encyclopaedia. He has published widely on music and spirituality and on music in the Balkans and the Mediterranean and is the author of Modernism and Orthodox Spirituality in Contemporary Music (ISOCM, 2014).

Contributions: Robert Saler
Robert Saler is Research Professor of Religion and Culture and Associate Dean at Christian Theological Seminary in Indianapolis, where he also serves as Executive Director of the Center for Pastoral Excellence. He is the author of Between Magisterium and Marketplace (Fortress, 2014), Theologia Crucis (Cascade, 2016), and All These Things into Position: What Theology Can Learn from Radiohead (Cascade, 2019).

Contributions: Andrew Shenton
Andrew Shenton is a scholar, prize-winning author, performer, educator, and administrator based in Boston, Massachusetts. He holds masters and doctoral degrees from Yale and Harvard, respectively, and is a Professor of Music at Boston University. His extensive work on Arvo Pärt includes The Cambridge Companion to Arvo Pärt (Cambridge, 2012), which he edited; the monograph Arvo Pärt’s Resonant Texts: Choral and Organ Music, 1956–2015 (Cambridge, 2018); and several essays. He has conducted the US premiere of several of Pärt’s works as Artistic Director of the Boston Choral Ensemble.

Contributions: Toomas Siitan
Toomas Siitan is an authoritative Pärt scholar, having worked closely with the composer for several decades. He graduated from the Estonian Academy of Music as a composer and received his PhD in musicology from the University of Lund. Since 1986, he has taught music history at the Estonian Academy of Music and Theatre, rising to Professor in 2004 and serving as head of the Department of Musicology since 2013. Siitan has published extensively on Pärt, Protestant singing and church history in nineteenth-century Estonia and Latvia, and the general history of Western music. Siitan’s work has been recognized by the Estonian Composers’ Union, the Estonian Cultural Foundation, the Estonian Music Society, and by a service medal from the Estonian government.

Contributions: Sevin Yaraman
Sevin Huriye Yaraman, a music theorist, received her PhD from the Graduate Center of the City of New York. She is a Senior Lecturer at Fordham University, where she teaches Music for Dancers in the Fordham/Alvin Alley BFA program and seminars on music and dance and the perception of others. She was the recipient of an AAUW fellowship in support of her book Revolving Embrace: The Waltz, as Sex, Steps, and Sound (2002) and received a fellowship from the Istanbul Tarihi Turk Muzigi Toplulugu (Istanbul Historical Turkish Music Society) for her research on the role of music and movement in the Sufi contemplative practices of Turkey. Yaraman was granted a Faculty Fellowship for Fall 2020 to develop her current interest in Music and Disability.