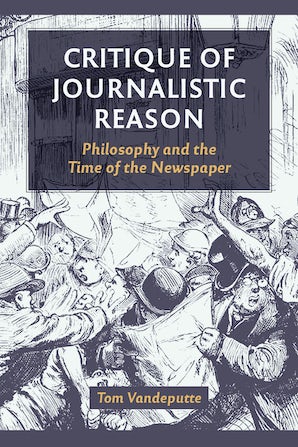 Philosophy and the Time of the Newspaper

An encounter between philosophy and journalism recurs across the modern philosophical tradition. Images of reporters and newspaper readers, messengers and town criers, announcements and rumors populate the work of such thinkers as Kierkegaard, Nietzsche, and Benjamin. This book argues that these three thinkers’ preoccupation with journalism cannot be separated from their philosophy “proper” but plays a pivotal role in their philosophical work, where it marks an important nexus between their theories of history, time, and language.

Journalism, in the tradition Vandeputte brings to light, figures before anything else as a cipher of the time in which philosophy is written. If the journalist and newspaper reader characterize what Kierkegaard calls “the present age,” that is because they exemplify a present marked by the crisis of the philosophy of history—a time after the demise of history as a philosophizable concept. In different ways, the pages of the newspaper appear in the European philosophical tradition as a site where teleological and totalizing representations of history must founder, together with the conceptions of progress and development that sustain them.

But journalism does not simply mark the end of philosophy; for Kierkegaard, Nietzsche, and Benjamin, journalistic writing also takes on an exemplary role in the attempt to think time and history in the wake of this demise. The concepts around which these attempts crystallize—Kierkegaard’s “instant,” Nietzsche’s “untimeliness,” and Benjamin’s “actuality”—all emerge from the philosophical confrontation with journalism and its characteristic temporalities.

This is a fascinating and provocative book, powerfully argued, exegetically adroit, and profoundly suggestive in its implications. Vandeputte offers a series of extraordinarily fine-grained, original, and subtle readings that brilliantly demonstrate how philosophy’s ambivalence about journalism expresses philosophy’s own uneasy relation toward its temporal and historical constitution. It makes us think anew about the ‘new’ and the ‘news’ and about ‘thinking’ itself.---Rebecca Comay, University of Toronto,

Critique of Journalistic Reason offers a provocative reframing of modern European thought, expanding and redirecting Foucault’s insight into the emergence of ‘today’ as a post-Kantian philosophical problem.---Peter Fenves, Northwestern University,

By (author) Tom Vandeputte
Tom Vandeputte is head of Critical Studies at the Sandberg Institute in Amsterdam, where he teaches continental philosophy and critical theory. He is also a fellow at the Institute for Cultural Inquiry (ICI) Berlin, where he is preparing a book on the political thought of Walter Benjamin.