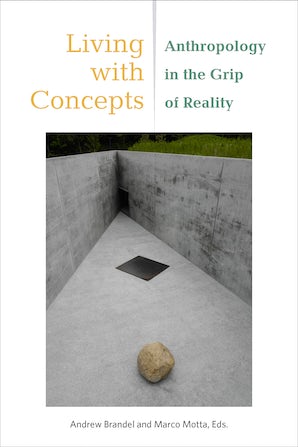 This volume examines an often taken for granted concept—that of the concept itself. How do we picture what concepts are, what they do, how they arise in the course of everyday life? Challenging conventional approaches that treat concepts as mere tools at our disposal for analysis, or as straightforwardly equivalent to signs to be deciphered, the anthropologists and philosophers in this volume turn instead to the ways concepts are already intrinsically embedded in our forms of life and how they constitute the very substrate of our existence as humans who lead lives in language.

Attending to our ordinary lives with concepts requires not an ascent from the rough ground of reality into the skies of theory, but rather acceptance of the fact that thinking is congenital to living with and through concepts. The volume offers a critical and timely intervention into both contemporary philosophy and anthropological theory by unsettling the distinction between thought and reality that continues to be too often assumed and showing how the supposed need to grasp reality may be replaced by an acknowledgement that we are in its grip.

Marco Motta (Edited By)
Marco Motta is Postdoctoral Research Fellow at the University of Bern.

Contributions: Veena Das
Veena Das is Krieger-Eisenhower Professor of Anthropology and adjunct professor of humanities at the Department of Comparative Thought and Literature at the Johns Hopkins University. Her most recent books are Life and Words: Violence and the Descent into the Ordinary (2007), Affliction: Health, Disease, Poverty (2015), and Four Lectures on Ethics (coauthored, 2015). She has also edited or coedited several books on social suffering, living and dying in the contemporary world, and the relation between philosophy and anthropology. Das is a Fellow of the American Academy of Arts and Sciences, the Academy of Scientists from Developing Societies, and Corresponding Fellow of the British Academy. She has received honorary doctorates from the University of Chicago, University of Edinburgh, University of Bern, and from Durham University. In 2015, she received the Nessim Habib Prize from the University of Geneva.

Contributions: Michael Lambek
Michael Lambek is a professor of anthropology and the Canada Research Chair at the University of Toronto Scarborough. He has edited Ordinary Ethics and A Companion to the Anthropology of Religion, among many other works.