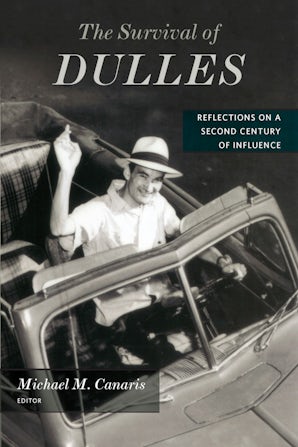 Description
This collection, marking the centenary of Avery Dulles’s birth, makes an entirely distinctive contribution to contemporary theological discourse as we approach the second century of the cardinal’s influence, and the twenty-first of Christian witness in the world. Moving beyond a festschrift, the volume offers both historical analyses of Dulles’s contributions and applications of his insights and methodologies to current issues like immigration, exclusion, and digital culture. It includes essays by Dulles’s students, colleagues, and peers, as well as by emerging scholars who have been and continue to be indebted to his theological vision and encyclopedic fluency in the ecclesiological developments of the post-conciliar Church. Though focused more on Catholic and ecumenical affairs than interreligious ones, the volume is intentionally outward-facing and strives to make clear the diverse and pluralistic contours of the cardinal’s nearly unrivaled impact on the North American Church, which truly crossed ideological, denominational, and generational boundaries. While critically recognizing the limits and lacunae of his historical moment, it serves as one among a multitude of testaments to the notion that the ripples of Avery Dulles’s influence continue to widen toward intellectually distant shores.
Reviews

This book rightly celebrates the superlative theological contribution of Avery Dulles. As the title indicates and as many of the essays show, Dulles’s theology continues to shed bright light on the journey of the pilgrim Church. As one who learned much from him but also had some disagreements, my response to the thesis of this book is simply—Amen, amen! Alleluia!---Charles E. Curran, Elizabeth Scurlock University Professor of Human Values, Southern Methodist University,

The essays in The Survival of Dulles provide a cogent and compelling reflection on the development of one theologian’s craft over a long and productive lifetime and offer insight into the meaning and significance of his work for today. The contributors to this volume extend Dulles’s project to the present moment by creatively engaging both the Christian tradition and contemporary culture to shed light on such pressing topics as migration, ecumenism, and the church in the digital age. This volume will introduce Dulles to an emerging generation of scholars and deepen the appreciation of Dulles for those who are familiar with his work.---Nicholas Rademacher, Cabrini University,

This is a valuable addition to the scholarly literature because Dulles’s life and thought do indeed remain relevant. Recommended. - Choice

4 Imaging the Church in the Age of Migration: The Legacy of Avery Dulles for Asian Christianities
Peter C. Phan | 22

5 Fluency of Interpretation: A Key to Avery Dulles’s Practice of Theology
Elizabeth A. Johnson, C.S.J. | 41

10 The Undomesticated Church: Inspiration and the Mission of the Family
Mary Beth Yount | 105

Contributions: Michael M. Canaris
Michael M. Canaris is associate professor of ecclesiology and systematic theology at Loyola University Chicago’s Institute of Pastoral Studies, where he also coordinates the Institute’s graduate programs in Rome. He holds degrees from or has taught at six Jesuit universities and was Avery Cardinal Dulles’s last doctoral student and graduate research assistant.

Contributions: H. Ashley Hall
H. Ashley Hall is associate professor of theology at Creighton University in Omaha, Nebraska. He served as a delegate in Round XII of the official Lutheran–Roman Catholic Dialogue in the United States. He was a graduate assistant to Cardinal Dulles from 2002 to 2004.

Contributions: Elizabeth Johnson, C.S.J.
Elizabeth A. Johnson, C.S.J., distinguished professor emerita of theology at Fordham University, was both a graduate student and then faculty colleague of Avery Dulles. A past president of the Catholic Theological Society of America, and also of the interreligious American Theological Society, she finds great joy in writing, editing, teaching, mentoring, and public lecturing in theology. Her twelve books, among them She Who Is: The Mystery of God in Feminist Theological Discourse (1992/2017) and Creation and the Cross: The Mercy of God for a Planet in Peril (2018), have been translated into numerous languages.

Contributions: Anne-Marie Kirmse, O.P.
Anne-Marie Kirmse, O.P., a member of the Sisters of Saint Dominic of Amityville, New York, recently retired from Fordham University, where she served as research associate for the Laurence J. McGinley Chair in Religion and Society. She lectures and writes frequently on the theology of Cardinal Dulles and is currently working on a biography of his life, based on the twenty years she worked with him while he was at Fordham.

Contributions: Rev. Joseph T. Lienhard, S.J.
Joseph T. Lienhard, S.J., a native of New York City, was ordained a priest in 1971. He received the doctorate in theology from the University of Freiburg (Germany) and began teaching at Marquette University in 1975. Since 1990 he has taught at Fordham University. He has held visiting professorships at John Carroll University, Boston College, St. Joseph’s Seminary, the Pontifical Biblical Institute, and the Pontifical Gregorian University. Fr. Lienhard is the author, editor, or translator of twelve books and the author of more than fifty scholarly articles.

Contributions: Bishop James Massa
James Massa is an auxiliary bishop of the Diocese of Brooklyn and the Rector of St. Joseph’s Seminary in Yonkers, New York. He earned his Ph.D. at Fordham University in 1997, where he wrote his dissertation on communion ecclesiology under the late Cardinal Avery Dulles. He has taught at various seminaries in the Boston and New York City areas and is the past executive director of the Secretariat for Ecumenical and Interreligious Affairs of the United States Conference of Catholic Bishops. Bishop Massa has also written and lectured on various topics pertaining to ecumenism and the Catholic Church’s engagement with other religions.

Contributions: Michael C. McCarthy, S.J.
Michael C. McCarthy, S.J., is the vice president for mission integration and planning at Fordham University. He previously served as the executive director of the Ignatian Center for Jesuit Education at Santa Clara University, where he was also the Edmund Campion Professor in the religious studies and classics departments. He holds degrees from Stanford University, Oxford University, the Jesuit School of Theology in Berkeley, California, and the University of Notre Dame.

Contributions: Stephanie Puen
Stephanie Ann Y. Puen is a faculty member at the Ateneo de Manila University in the Philippines. She finished her Ph.D. at Fordham University in 2021. A Filipino of Chinese descent, she has worked in corporate planning in the manufacturing industry. Her research interests are in economics and business ethics, Catholic social thought and design thinking, and theology and popular culture, and she has written on these topics for both scholarly and popular publications.

Contributions: Patrick J. Ryan, S.J.
Patrick J. Ryan, S.J., the Laurence J. McGinley Professor of Religion and Society at Fordham University since 2009, studied at Fordham, Woodstock College in Maryland, and Harvard University (Ph.D., 1975). He lived and taught in Nigeria and Ghana for twenty-six years. His most recent book is Amen: Jews, Christians, and Muslims Keep Faith with God (2018).

Contributions: Katherine Schmidt
Katherine G. Schmidt is an assistant professor of theology at Molloy College in Rockville Center, New York. She holds a doctorate from the University of Dayton and focuses her research on the intersection between religion/theology and technology, the internet, and media. She is the author of Virtual Communion: Theology of the Internet and the Catholic Sacramental Imagination (2020).

Contributions: Vincent L. Strand, S.J.
Vincent L. Strand, S.J., is a doctoral student in systematic theology at the University of Notre Dame. His research focuses on the theology of grace, especially in nineteenth-and twentieth-century Catholic theology. He has earned degrees from Boston College, the Pontifical Gregorian University, Fordham University, and Marquette University. His scholarly and popular writings have appeared in journals such as Nova et Vetera, America, and Review for Religious.

Contributions: Terrence W. Tilley
Terrence W. Tilley chaired the Theology Department (2006–2013) and held the Dulles Chair in Catholic Theology (2010–2017) at Fordham University. He previously taught at Georgetown, St. Michael’s (Vermont), Florida State, and Dayton. Among his thirteen books, two had multiple chapters coauthored with graduate students, two were co-edited, and one was edited. He served terms as president of the College Theology Society, the Society for Philosophy of Religion, and the Catholic Theological Society of America, from whom he also received the John Courtney Murray Award.

Contributions: Mary Beth Yount
Mary Beth Yount teaches theology and ethics courses at the doctoral and undergraduate levels at Neumann University. Named one of “Philadelphia’s Most Interesting People” by NBC-10, her academic and nonprofit work has been featured in over a hundred media outlets, both scholarly and popular, including Time and Rome Reports. Her honors and awards include the Benemerenti Medal from Pope Francis, two Catholic Press Association awards, and Neumann University’s Scholar’s Award. She served as director of content and programming for the World Meeting of Families, including Pope Francis’s 2015 visit to Philadelphia.