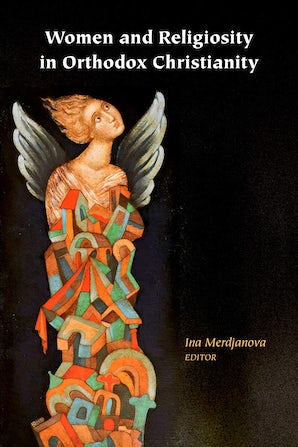 Women and Religiosity in Orthodox Christianity fills a significant gap in the sociology of religious practice: Studies focused on women’s religiosity have overlooked Orthodox populations, while studies of Orthodox practice (operating within the dominant theological, historical, and sociological framework) have remained gender-blind.

The essays in this collection shed new light on the women who make up a considerable majority of the Orthodox population by engaging women’s lifeworlds, practices, and experiences in relation to their religion in multiple, varied localities, discussing both contemporary and pre-1989 developments. These contributions critically engage the pluralist and changing character of Orthodox institutional and social life by using feminist epistemologies and drawing on original ethnographic research to account for Orthodox women’s previously ignored perspectives, knowledges, and experiences.

Combining the depth of ethnographic analysis with geographical breadth and employing a variety of research methodologies, this book expands our understanding of Orthodox Christianity by examining Orthodox women of diverse backgrounds in different settings: parishes, monasteries, and the secular spaces of everyday life, and under shifting historical conditions and political regimes. In defiance of claims that Orthodox Christianity is immutable and fixed in time, these essays argue that continuity and transformation can be found harmoniously in social practices, demographic trends, and larger material contexts at the intersection between gender, Orthodoxy, and locality.

Authors & Distributors
Ina Merdjanova is Visiting Professor at Coventry University’s Centre for Trust, Peace and Social Relations & Senior Researcher and Adjunct Assistant Professor in Religious Studies at the Irish School of Ecumenics, Trinity College Dublin. She has held visiting fellowships at Oxford University, New York University, The Woodrow Wilson International Center for Scholars in Washington, D.C., the Netherlands Institute for Advanced Studies in the Humanities and Social Sciences, and Aleksanteri Institute at Helsinki University, among others. She is author of four books and numerous articles on religion and politics in post-communist society. Her recent publications include Religion as a Conversation Starter: Interreligious Dialogue for Peacebuilding in the Balkans, and Rediscovering the Umma: Muslims in the Balkans between Nationalism and Transnationalism.
Reviews

This innovative collection of essays offers fresh and much needed perspectives on Orthodox worlds as experienced by women. These ethnographies not only bring us into the lived religious experiences of Orthodox women but show how they are animated by broader dynamics of political theology and neoliberalism. A must read for anyone interested in Orthodoxy today.---Catherine Wanner, Pennsylvania State University,

Women and Religiosity in Orthodox Christian Contexts addresses its topic globally, with contributions devoted to women’s lived Orthodox experiences and identities from regions in which Orthodoxy has played a historically prominent role—Greece, Bulgaria, Russia, Georgia, Serbia, Romania, and Moldova—and countries where Orthodox Christians have historically been a distinct minority—Finland, but especially the United States.---Vera Shevzov, Smith College,

Women and Orthodox Dissent: The Case of the Archangelist Underground
Movement in Soviet Moldavia | 129
James Kapaló

Contributions: Kristin Aune
Kristin Aune is Professor of Sociology of Religion at Coventry University’s Centre for Trust, Peace, and Social Relations. Her research is on religion, gender, and higher education, and her books include Women and Religion in the West (edited with S. Sharma and G. Vincett, Routledge, 2008). Her recent journal articles include “Feminist Spirituality as Lived Religion” (Gender & Society) and “Navigating the Third Wave: Contemporary UK Feminist Activists and ‘Third-Wave Feminism’ ” (Feminist Theory). She is coeditor of Routledge’s Gendering the Study of Religion in the Social Sciences book series and an editor of the journal Religion and Gender.

Contributions: Milica Bakic-Hayden
Milica Bakić-Hayden is Lecturer Emeritus at the University of Pittsburgh, where she has taught for the past twenty-five years, first at the Slavic Department and from 1997 to 2018 at the Department of Religious Studies. She obtained her BA and MA degrees from the University of Belgrade and her PhD from the University of Chicago. Geographic areas of academic interest include the Balkans and South Asia. Special topics of study and research include Indian religions, the philosophy and theory of art, Eastern Orthodox Christianity, Balkan cultures and society, comparative mysticism, monasticism, and sainthood.

Contributions: Maria Bucur
Maria Bucur is the John V. Hill Chair in East European History and Gender Studies at Indiana University, Bloomington. Her publications include The Birth of Democratic Citizenship: Women in Modern Romania (with Mihaela Miroiu, 2018), The Century of Women: How Women Have Changed the World since 1900 (2018), Gendering Modernism: A Historical Reappraisal of the Canon (2017), and Heroes and Victims: Remembering War in Twentieth-Century Romania (2009).

Contributions: Ketevan Gurchiani
Ketevan Gurchiani is Associate Professor of Cultural Studies at Ilia State University, Tbilisi, and chair of the board of trustees at the Caucasus Institute for Peace, Democracy, and Development (CIPDD). She has been the recipient of numerous research grants and awards from Georgian, German, and US based foundations. Her research interests include different aspects of religiosity, with a special focus on everyday religion in post- Soviet Georgia. She is the author of several articles and editor of the volume Religion in Everyday Life (Ilia State University Press, 2018).

Contributions: James Kapalo
James Kapaló is Senior Lecturer in the Study of Religions at University College Cork, Ireland, and Principal Investigator of the European Research Council project “Creative Agency and Religious Minorities: ‘Hidden Galleries’ in the Secret Police Archives in Central and Eastern Europe” (project no. 677355). He is the author of two monographs, Text, Context, and Performance: Gagauz Folk Religion in Discourse and Practice (Brill, 2011) and Inochentism and Orthodox Christianity: Religious Dissent in the Russian and Romanian Borderlands (Routledge, 2019).

Contributions: Helena Kupari
Helena Kupari is Postdoctoral Researcher at the Faculty of Arts, University of Helsinki, Finland. In her postdoctoral project, funded by the Academy of Finland, she studies conversion to Orthodox Christianity among Finnish artists and cultural professionals. She has published two books, the monograph Lifelong Religion as Habitus: Religious Practice among Displaced Karelian Orthodox Women in Finland (Brill 2016) and an edited volume, Orthodox Christianity and Gender: Dynamics of Tradition, Culture, and Lived Practice (with Elina Vuola, Routledge 2020).

Contributions: Ina Merdjanova
Ina Merdjanova is Visiting Professor at Coventry University’s Centre for Trust, Peace and Social Relations & Senior Researcher and Adjunct Assistant Professor in Religious Studies at the Irish School of Ecumenics, Trinity College Dublin. She has held visiting fellowships at Oxford University, New York University, The Woodrow Wilson International Center for Scholars in Washington, D.C., the Netherlands Institute for Advanced Studies in the Humanities and Social Sciences, and Aleksanteri Institute at Helsinki University, among others. She is author of four books and numerous articles on religion and politics in post-communist society. Her recent publications include Religion as a Conversation Starter: Interreligious Dialogue for Peacebuilding in the Balkans, and Rediscovering the Umma: Muslims in the Balkans between Nationalism and Transnationalism.

Contributions: Sarah Riccardi-Swartz
Sarah Riccardi-Swartz is a postdoctoral fellow in the Luce-funded Recovering Truth: Religion, Journalism, and Democracy in a Post-Truth Era project, at the Center for the Study of Religion and Conflict at Arizona State University.

Contributions: Eleni Sotiriou
Eleni Sotiriou is a sociologist and social anthropologist. Her research interests focus on the relations between women, sociocultural change, and religion, particularly within Greek Orthodoxy. She has published articles on implicit religion, marriage, Orthodox monasticism, gender, materiality, and religion. Her recent publications include “ ‘Monasticizing the Monastic’: Religious Clothes, Socialization, and the Transformation of Body and Self among Greek Orthodox Nuns,” in the Italian Journal of Sociology of Education (2015); and “On Saints, Prophets, Philanthropists, and Anticlericals: Orthodoxy, Gender, and the Crisis in Greece,” in Orthodox Christianity and Gender: Dynamics of Tradition, Culture, and Lived Practice, ed. Helena Kupari and Elina Vuola (Routledge, 2020).

Contributions: Tatiana Tiaynen-Qadir
Tatiana Tiaynen-Qadir holds two PhDs, one in social anthropology from Finland (2013) and another in history from Russia (2007). She now works as a Research Fellow at the Center for the Study of Gender, Religion, and Culture in Toronto, Canada. Her research focuses on archetypal theory, aging studies, ethnography, and the anthropology of religion. She has published articles in journals including Global Networks, Religions, Approaching Religion, the Journal of Cross Cultural Gerontology, and the European Journal of Cultural Studies and has contributed chapters to edited volumes published by Routledge, Gaudeamus, and the Russian Academy of Sciences.

Contributions: Detelina Tocheva
Detelina Tocheva is a social anthropologist with a doctoral degree from the École des Hautes Études en Sciences Sociales, Paris (2005). She holds a permanent position as Research Fellow at the Centre National de la Recherche Scientifique and is a faculty member of the Groupe Sociétés, Religions, Laïcités (EPHE-CNRS-PSL Research University Paris). Between 2006 and 2012, she was a Research Fellow at the Max Planck Institute for Social Anthropology, Halle, Germany. She has conducted ethnographic fieldwork in Russian Orthodox parishes in northwestern Russia and in the southern part of the Rhodope Mountains in Bulgaria. Her recent publications include Intimate Divisions: Street-Level Orthodoxy in Post-Soviet Russia (LIT Verlag, 2017).