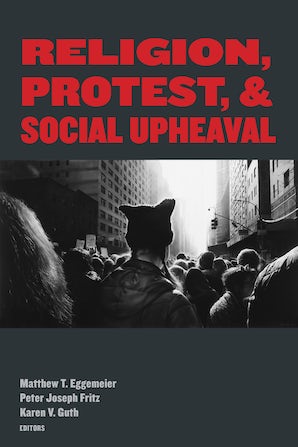 Represents some of the best, cutting-edge thinking available on multiple forms of social upheaval and related grassroots movements.

From the January 2017 Women’s March to the August 2017 events in Charlottesville and the 2020 protests for racial justice in the wake of George Floyd’s murder, social upheaval and protest have loomed large in the United States in recent years. The varied, sometimes conflicting role of religious believers, communities, and institutions in such events and movements calls for scholarly analysis. Arising from a conference held at the College of the Holy Cross in November 2017, Religion, Protest, and Social Upheaval gathers contributions from ten scholars in religious studies, theology and ethics, and gender studies—from seasoned experts to emerging voices—to illuminate this tumultuous era of history and the complex landscape of social action for economic, racial, political, and sexual and gender justice.

The contributors consider the history of resistance to racial capitalist imperialism from W. E. B. Du Bois to today; the theological genealogy of the capitalist economic order, and Catholic theology’s growing concern with climate change; affect theory and the rise of white nationalism, theological aesthetics, and solidarity with migrants; differing U.S. Christian churches’ responses to the “revolutionary aesthetics” of the Black Lives Matter movement; Muslim migration and the postsecular character of Muslim labor organizing in the United States; shifts in moral reasoning and religiosity among U.S. women’s movements from the 1960s to today; and the intersection of heresy discourse and struggles for LGBTQ+ equality among Korean and Korean-American Protestants. With this pluralistic approach, Religion, Protest, and Social Upheaval offers a snapshot of scholarly religious responses to the crises and promises of the late 2010s and early 2020s. Representing the diverse coalitions of the religious left, it provides groundbreaking analysis, charts trajectories for further study and action, and offers visions for a more hopeful future.

There is no current text that gathers together so many contemporary luminaries to engage in deep thinking about the relationship between religion and the praxis of justice. Religion, Protest, and Social Upheaval represents some of the most profound and compelling voices in contemporary theology and religious studies to reflect on some of the day’s most urgent social issues. Each of these essays is a tremendous contribution in its own right, but as a collection they fuse breadth and depth in compelling harmony. If recent years have witnessed an acceleration of collective consciousness about the persistent fusion between religion and contemporary movements, this anthology excavates theologies underpinning contemporary structures of both oppression and liberation.---Jack Lee Downey, John Henry Newman Professor in Roman Catholic Studies, University of Rochester.

Part I: Upheaval Under Capitalism
1. Capital’s “Secret Orders”: A Du Boisian Lens on the Alt- Right and White Supremacy
Mark Lewis Taylor | 13
2. Protest at the Void: Theological Challenges to Capitalist Totality
Devin Singh | 49
3. As the World Burns: Laudato Si’, the Climate Crisis, and the Limits of Papal Power
Mary Doak | 69

Contributions: Mary Doak
Mary Doak (Ph.D., University of Chicago) is a Professor of Theology at the University of San Diego. Her publications include A Prophetic, Public Church: Witness to Hope Amid the Global Crises of the 21st Century (Liturgical Press, 2020), Divine Harmony: Seeking Community in a Broken World (Paulist Press, 2017), and other books and articles on Christian faith, religious freedom, and public life. She is currently serving as president of the College Theology Society and is a past president of the American Theological Society (Midwest).

Edited: Matthew T. Eggemeier
Matthew T. Eggemeier is Professor of Religious Studies at the College of the Holy Cross. He is the author of A Sacramental-Prophetic Vision: Christian Spirituality in a Suffering World and Against Empire: Ekklesial Resistance and the Politics of Radical Democracy.

Contributions: Nichole Flores
Nichole M. Flores is an Assistant Professor of Religious Studies at the University of Virginia. She is author of The Aesthetics of Solidarity: Our Lady of Guadalupe and American Democracy (Georgetown University Press, 2021). She has also published several articles and book chapters on migration, trafficking, gender, and family. She is a contributing author on the masthead at America: The Jesuit Review of Faith and Culture. In 2015, she was awarded the Catherine Mowry LaCugna Award from the Catholic Theological Society of America. Flores earned an A.B. from Smith College, an M.Div. from Yale University, and a Ph.D. from Boston College.

Edited: Karen V. Guth
Karen V. Guth is Associate Professor of Religious Studies at the College of the Holy Cross. She is the author of The Ethics of Tainted Legacies: Human Flourishing after Traumatic Pasts and Christian Ethics at the Boundary: Feminism and Theologies of Public Life.

Contributions: Ju Hui Judy Han
Ju Hui Judy Han is an Assistant Professor at the University of California, Los Angeles, where she teaches gender studies and Korean studies. She writes, draws comics, and gives talks about Korean/ American evangelical missions and megachurches, activism and protest cultures, and queer feminist politics in Korea and the Korean diaspora. Her publications include articles in Journal of Korean Studies, positions: asia critique, Critical Asian Studies, and Geoforum as well as in edited books, including Territories of Poverty: Rethinking North and South (2015) and Ethnographies of U.S. Empire (2018). She has a Ph.D. in Geography from University of California, Berkeley.

Contributions: Zayn Kassam
Zayn Kassam is the John Knox MacLean Professor of Religious Studies at Pomona College. She has authored an introductory volume on Islam and edited two volumes on gender, one titled Women and Islam, and the other Women and Asian Religions. Her current research is on Muslim migration to North America. She is also the coeditor of the Journal of Feminist Studies in Religion. Kassam has thrice won the Wig Award for Distinguished Teaching at Pomona College, as well as the American Academy of Religion’s national award for Excellence in Teaching.

Contributions: Kwok Pui-lan
Kwok Pui-lan is Dean’s Professor of Systematic Theology at Candler School of Theology, Emory University. She is a past president of the American Academy of Religion. An internationally known theologian, she is author and editor of many books, including Postcolonial Imagination and Feminist Theology and Postcolonial Politics and Theology. Her most recent edited volume is The Hong Kong Protests and Political Theology.

Contributions: Donovan O. Schaefer
Donovan O. Schaefer is an Assistant Professor in the Department of Religious Studies at the University of Pennsylvania. He joined the department in 2017 after spending three years teaching at the University of Oxford. His first book, Religious Affects: Animality, Evolution and Power, was published by Duke University Press in 2015. It explores the relationships between theories of feeling, religion, and the experience of animals. His second book, Wild Experiment: Feeling Science and Secularism after Darwin, considers how affect theory can be applied to science, secularism, race, and conspiracy theory.

Contributions: Devin Singh
Devin Singh is an Associate Professor of Religion at Dartmouth College, where he teaches courses on modern religious thought in the West, social ethics, and the philosophy of religion. He is also a faculty associate in Dartmouth’s Consortium of Studies in Race, Migration, and Sexuality. Singh is the author of Divine Currency: The Theological Power of Money in the West (2018) as well as articles in journals such as Political Theology, Journal of Religious Ethics, Telos, and Harvard Theological Review.

Contributions: C. Melissa Snarr
C. Melissa Snarr is the E. Rhodes and Leona B. Carpenter Chair and Associate Professor of Ethics & Society at Vanderbilt Divinity School. Her work focuses on the intersections of religion, social change, and political ethics with particular attention to ethnographic fieldwork and sociological/ political theory. She is the author of two books, All You That Labor: Religion and Ethics in the Living Wage Movement and Social Selves and Political Reforms: Five Visions in Contemporary Christian Ethics, and articles in the area of Christian feminist ethics, worker justice, and interfaith organizing.

Contributions: Mark Lewis Taylor
Mark Lewis Taylor is a Professor in Religion and Society at Princeton Theological Seminary. Among his books are Religion, Politics and the Christian Right and The Theological and the Political. Taylor received the Best General Interest Book Award for his 2001 book, The Executed God: The Way of the Cross in Lockdown America (2nd edition, 2015). In addition to years of anti– death penalty work and prison activism, Taylor remains active in solidarity work against U.S. dominance in Central America. Further publications and resources are available at www.marklewistaylor.com.