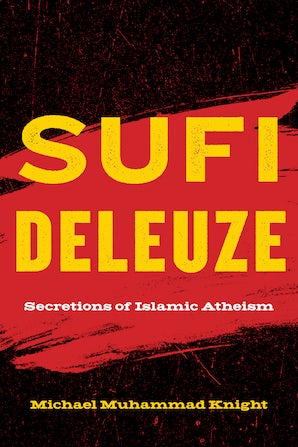 “There is always an atheism to be extracted from a religion,” Deleuze and Guattari write in their final collaboration, What Is Philosophy? Their claim that Christianity “secretes” atheism “more than any other religion,” however, reflects the limits of their archive. Theological projects seeking to engage Deleuze remain embedded within Christian theologies and intellectual histories; whether they embrace, resist, or negotiate with Deleuze’s atheism, the atheism in question remains one extracted from Christian theology, a Christian atheism. In Sufi Deleuze, Michael Muhammad Knight offers an intervention, engaging Deleuzian questions and themes from within Islamic tradition.

Even if Deleuze did not think of himself as a theologian, Knight argues, to place Deleuze in conversation with Islam is a project of comparative theology and faces the challenge of any comparative theology: It seemingly demands that complex, internally diverse traditions can speak as coherent, monolithic wholes. To start from such a place would not only defy Islam’s historical multiplicity but also betray Deleuze’s model of the assemblage, which requires attention to not only the organizing and stabilizing tendencies within a structure but also the points at which a structure resists organization, its internal heterogeneity, and unpredictable “lines of flight.”

A Deleuzian approach to Islamic theology would first have to affirm that there is no such thing as a universal “Islamic theology” that can speak for all Muslims in all historical settings, but rather a multiplicity of power struggles between major and minor forces that contest each other over authenticity, authority, and the making of “orthodoxy.” The discussions in Sufi Deleuze thus highlight Islam’s extraordinary range of possibilities, not only making use of canonically privileged materials such as the Qur’an and major hadith collections, but also exploring a variety of marginalized resources found throughout Islam that challenge the notion of a singular “mainstream” interpretive tradition. To say it in Deleuze’s vocabulary, Islam is a rhizome.

This book is sublime. Michael Muhammad Knight shows how key Deleuzian concepts can illuminate a rich texture of often-overlooked religious experimentation. In this territory he is a trustworthy, even masterful guide. Perhaps more importantly, Knight uses Deleuzian thought to challenge and explode received concepts in the study of religion, and to challenge what religion is in itself, disturbing the sense of what is orthodox or heretical, mainstream or marginal, textual or material, immanent or transcendent. And Knight does this not only for the case of Islam (in itself a major contribution to undoing our civiliizational and political-theological impasses) but potentially for the world's many other so-called religions, as well. Essential work.---Joshua Ramey, author of The Hermetic Deleuze: Philosophy and Spiritual Ordeal, and Politics of Divination: Neoliberal Endgame and the Religion of Contingency

2 People of the Sunna and the Assemblage: Deleuzian Hadith Theory | 61

3 Beyond Theology: Sufism as Arrangement and Affect | 84

4 The Immanence of Baraka: Bodies and Territory | 104

Conclusion: The Seal of Muslim Pseudo | 144