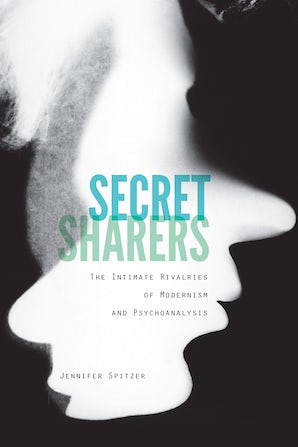 Secret Sharers traces a genealogy of secret sharing between literary modernism and psychoanalysis, focusing on the productive entanglements and intense competitive rivalries that helped shape Anglo-American modernism as a field. As Jennifer Spitzer reveals, such rivalries played out in explicit criticism, inventive misreadings, and revisions of Freudian forms—from D. H. Lawrence’s re-descriptions of the unconscious to Vladimir Nabokov’s parodies of the psychoanalytic case study. While some modernists engaged directly with Freud and Freudian psychoanalysis with unmistakable rivalry and critique, others wrestled in more complex ways with Freud’s legacy. The key protagonists of this study—D. H. Lawrence, Virginia Woolf, W. H. Auden, and Vladimir Nabokov—are noteworthy for the way they engaged with, popularized, and revised the terms of Freudian psychoanalysis, while also struggling with it as an encroaching discourse. Modernists read psychoanalysis, misread psychoanalysis, and sometimes refused to read it altogether, while expressing anxiety about being read by psychoanalysis—subjecting themselves and their art to psychoanalytic interpretations.

As analysts, such as Freud, Ernest Jones, and Alfred Kuttner, turned to literature and art to illustrate psychoanalytic theories, modernists sought to counter such reductive narratives by envisioning competing formulations of the relationship between literature and psychic life. Modernists often expressed ambivalence about the probing, symptomatic style of psychoanalytic interpretation and responded with a re-doubling of arguments for aesthetic autonomy, formal self-consciousness, and amateurism. Secret Sharers reveals how modernists transformed the hermeneutic and diagnostic priorities of psychoanalysis into novel aesthetic strategies and distinctive modes of epistemological and critical engagement. In reassessing the historical and intellectual legacies of modernism, this book suggests that modernist responses to psychoanalytic criticism anticipate more recent critical debates about the value of “symptomatic” reading and the “hermeneutics of suspicion.”

If modernism was anything, it was a literature of consciousness. For that reason, Freud and psychoanalysis have long been seen as crucial context to the literary innovations of the early twentieth century. Secret Sharers, however, troubles received notions about the role of Freud within literary modernism, offering a new narrative in which modernism was shaped by an engagement that was both anxious and constitutive. Jennifer Spitzer’s book is a timely invitation to reexamine modernism’s fundamental concerns and their bearing on the work we do as literary critics.---Timothy Wientzen, author of Automatic: Literary Modernism and the Politics of Reflex

Spitzer moves beyond standard accounts of literary modernism’s debt to Freud to show how practicing psychoanalysts and modernist writers worked in close proximity on the same terrain—narrating the minds of others, interpreting the meaning of texts, theorizing queer experience. Attuned to subtler forms of influence and reaction—and featuring an ensemble cast of secondary characters who practiced or wrote about Freudian psychoanalysis—Secret Sharers offers a revelatory account of the rise of modernist conceptions of literary autonomy.---Laura Heffernan, author of The Teaching Archive: A New History for Literary Study

1 On Not Reading Freud: Amateurism, Expertise, and the
“Pristine Unconscious” in D. H. Lawrence | 31

2 The Soul under Psychoanalysis: Virginia Woolf and the Ethics of Intimacy | 59

Conclusion: Modernist Afterlives and the Legacies of Suspicion | 143

By (author) Jennifer Spitzer
Jennifer Spitzer is Associate Professor in the Department of Literatures in English at Ithaca College. Her work has appeared or is forthcoming in Modernism/Modernity, the Journal of Modern Literature, Studies in the Novel, Modern Language Quarterly, the New York Times, the Los Angeles Review of Books, Avidly, and other venues.