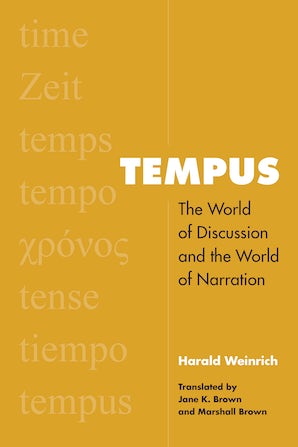 A foundational book by one of the most distinguished German humanists of the last half century, Tempus joins cultural linguistics and literary interpretation at the hip. Developing two controversial theses—that sentences are not truly meaningful in isolation from their contexts and that verb tenses are primarily indicators not of time but of the attitude of the speaker or writer—Tempus surveys a dazzling array of ancient and modern texts from famous authors as well as casual speakers of German, French, Italian, Spanish, Portuguese, Latin, and English, with a final chapter extending the observations to Greek, Russian, and world languages.

A classic in German and long available in many other languages, Tempus launched a new discipline, text linguistics, and established a unique career that was marked by precise observation, sensitive cultural outreach, and practical engagement with the situation of migrants. Weinrich’s robust and lucid close readings of famous and little-known authors from all the major languages of western Europe expand our literary horizons and challenge our linguistic understanding.

“Harald Weinrich’s classic book, long overdue for English translation, offers a groundbreaking study of time and tense. Arguing that tenses indicate not time in itself but the speaker’s relation to the utterance, Weinrich distinguishes narrative tenses from tenses of speech or commentary and explores the different ways in which they function in various European languages and works of literature.”---Jonathan Culler, author of Theory of the Lyric