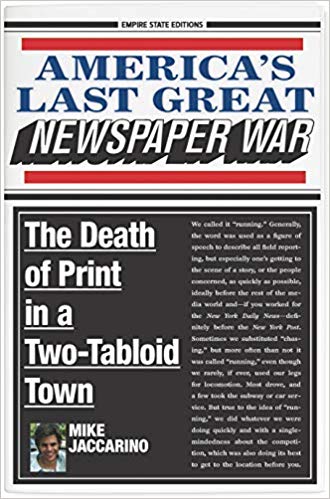 "In his debut book, former Daily News reporter Jaccarino effectively evokes a bygone era, focusing on the pugnacious personalities behind both papers, from the 1980s through the 2000s, as print journalism suffered significant entropy….These tales of tense stakeouts, murders, and various scandals have a pungent authenticity."–Kirkus Reviews

The first book to document the infamous New York Daily News and New York Post tabloid war from within the trenches – all amidst the rise of digital news…and the fall of print journalism.

When Mike Jaccarino was offered a job at the Daily News in 2006, he was asked a single question: “Kid, what are you going to do to help us beat the Post?” That was the year things went sideways at the News, when the New York Post surpassed its nemesis in circulation for the first time in the history of both papers, and the decades-long tabloid war waged by both papers became an all-out fight for survival.

In AMERICA’S LAST GREAT NEWSPAPER WAR: The Death of Print in a Two-Tabloid Town (Fordham University Press | Empire State Editions, March 2020, $34.95 Hardcover), Mike Jaccarino exposes a tabloid death match of such ferocity and obsession it's like has not occurred since Pulitzer-Hearst.

Since 2004, one in five local U.S. newspapers has shuttered — a total of 1,800 newspapers. This book describes in dramatic and human fashion how the “death of print journalism” played out in one city in America, as both the News and the Post battled to survive.

Told through the eyes of hungry “runners” (field reporters) and “shooters” (photographers), who would assemble on the scene of the biggest stories of the day, Mike Jaccarino’s memoir unmasks the do-whatever-it-takes era of reporting where the ends justified the means and nothing was off-limits. Jaccarino shares his no-holds-barred experiences—sneaking into hospitals, grinding out months-long stakeouts, infiltrating John Gotti’s crypt, conducting bidding wars for scoops, and high-speed car chases with Hillary Clinton, O.J. Simpson, and the baby mama of a philandering Congressman—all to get that coveted front page story.

The New York Daily News and the New York Post have long been the Hatfield and McCoys of American media: two warring tabloids in a town only big enough for one of them. As digital news made print journalism obsolete, the fight to survive in NYC became an epic, Darwinian battle. The reality of competition and the incredibly short half-life of breaking news ensured that runners and shooters did absolutely anything to be the first to get to the scene.

People consume media daily, but they don’t really have an idea how it is collected and what it takes to obtain and produce these stories. In THE LAST GREAT NEWSPAPER WAR, Jaccarino reveals how the sausage is made—and people will be shocked!

ABOUT THE AUTHOR:
Mike Jaccarino is a New York City-based journalist whose work has appeared in the New York Daily News, FoxNews.com, The Press of Atlantic City, The Jersey Journal, The Asbury Park Press and The Week magazine.

If you would like to receive a review copy or schedule an interview, please contact Jennifer
Richards at Over the River Public Relations: 201-242-9637, [email protected].