BOSS OF BLACK BROOKLYN: THE LIFE AND TIMES OF BERTRAM L. BAKER PUBLISHES

“Bertram L. Baker could not have had a better biographer than Ron Howell, a gifted journalist and truth seeker. Howell’s mesmerizing description of his grandfather’s life and career also paints an indispensable portrait an entire borough, city, and nation. Following in the footsteps of another politician
from Nevis—Founding Father Alexander Hamilton—Bertram L. Baker was a pioneer whose untold personal and political story is brilliantly depicted by a virtuoso and gifted writer who is well suited to revive him for all of us.”—Edwidge Danticat, author of BREATH, EYES, MEMORY; KRIK? KRAK!; THE DEW BREAKER, and BROTHER, I'M DYING

“Bert Baker was a pioneer and a giant, especially for a Black man in his time. His story has not been fully told. This book undertakes to do so. That’s important—because great men become great by building a legacy. It’s up to others to preserve it.”—Deval Patrick, former Governor of Massachusetts 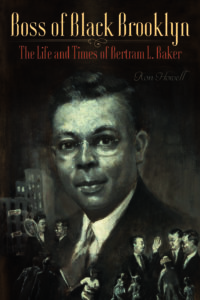 In November of 1948, Bertram L. Baker put his name on a page of Brooklyn history when he was elected to the New York State Assembly. Representing the growing central Brooklyn neighborhood of Bedford Stuyvesant, Baker became the first black person ever elected to office in Brooklyn, a place that now–seventy years later – has three dozen black elected officials, including members of Congress. In fact, Brooklyn has overtaken Harlem as the center of black political power and is synonymous with the black immigrant presence in New York City.

In BOSS OF BLACK BROOKLYN: The Life and Times of Bertram L. Baker (Fordham University Press/Empire State Editions; Hardcover; $29.95; October 2, 2018), journalist Ron Howell not only shares his grandfather’s impressive personal story, he also illuminates a fascinating era when West Indian families left their native islands, entered the U.S through Ellis Island, and settled in Brooklyn. In the earliest decades of the twentieth century, the West Indians were the first in the black communities of New York City to gain positions of political power as elected officials and as the bosses of the city’s political parties. They were also successful in the black community as realtors, and they set paths not only in established political parties but as radical activists, forming organizations such as the African Blood Brotherhood.

Widely respected by both black and white political leaders, Bertram Baker was a pioneer in Brooklyn politics. “I’ve come to understand more fully and to appreciate Bertram Baker’s political and public stature in those years,” says his grandson-in-law, Deval Patrick. “His rise from the life of a humble West Indian immigrant to become the first black person elected to office in the long history of Brooklyn; his sponsorship of the first housing non-discrimination legislation in America; his firm control of Borough politics; his encouragement of so many local organizers and politically ambitious young people; his close working partnership with New York Governor Nelson Rockefeller.”

Baker was not just the first black elected official in Brooklyn. For thirty years, from 1936 to 1966, he led the all-black American Tennis Association as its Executive Secretary, and he successfully negotiated to get Althea Gibson accepted into previously all-white tennis competitions, opening the doors for future champions like Arthur Ashe and Venus and Serena Williams.

The story Howell shares is not merely political; it’s also about poignantly personal. Howell penetrates the inner life of the man he and his cousins called “Daddy B.” and reveals themes that have great significance today – black fatherhood, relations between black men and black women, faithfulness to place and ancestry. This story travels back to Bertram Baker’s birth on Nevis, the tiny British Caribbean island that was also the birthplace of Alexander Hamilton (the first Nevisian to serve in the New York State Assembly) and details Baker’s upbringing there.

Beginning, as it does, at the end of the nineteenth century, BOSS OF BLACK BROOKLYN evokes the heart of the America that emerged on the world scene in the mid twentieth century, the place of dreams. And in its final chapters, it also tells us of the era when the earlier dream began to fade and central Brooklyn was called a ghetto, with all the disparagement implied in the term. Now, once again, things are shifting demographically. And the dreaminess of the transformations is felt in the book’s main character, its subject, Bertram L. Baker.

ABOUT THE AUTHOR
Ron Howell, the grandson of Bertram Baker, is a journalist from Brooklyn who writes on politics in the Caribbean, Latin America, and New York City. He is Associate Professor of Journalism at Brooklyn College.

If you would like to receive a review copy or schedule an interview, please contact Jennifer Richards at
Over the River Public Relations: 201-242-9637, [email protected].