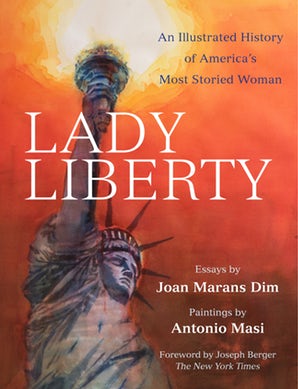 “Could there be a book more timely, more pertinent for America today than Lady Liberty? I do not think so….blended with the history that tells us that if America loses its welcoming soul, we have lost what makes us so special.”

“In an inspiring story about a statue named Lady Liberty, we find out how she was conceived in one artist’s colossal imagination and given everlasting meaning by another. This epic journey criss-crosses time and the globe to show how two works of art conjoin to underscore the rightful dignity belonging to the words immigrant, refugee, and laborer while highlighting our nation’s still unfulfilled ideals.”

The Statue of Liberty is a world-famous symbol of American freedom, but for those who made the arduous journey across the Atlantic, she was a signal of arrival, proclaiming the end of a long voyage and the start of a new life. In LADY LIBERTY: An Illustrated History of America’s Most Storied Woman (Fordham University Press | Empire State Editions; Hardcover; September 3, 2019; $29.95), writer Joan Marans Dim and award-winning artist Antonio Masi reveal this masterpiece in a fresh light by blending magnificent art and unvarnished history.

In the foreword, Joseph Berger, former Editor and Reporter for The New York Times, declares:

“Joan Marans Dim, a granddaughter of immigrants, vividly and unflinchingly captures the colorful story of Lady Liberty’s birth, life, and impact with all the ambiguities, all the sometimes uplifting, sometimes disheartening twists. And the illustrations by Antonio Masi, an immigrant himself as an eight-year-old, enhance the story with impressionistic paintings that evoke both the haunting splendor of the statue and the fulfillment of its promise for so many embattled immigrants and how far the United States must still go to realize its ideals—as is stunningly apparent in our federal government’s current hostility to immigrants.”

LADY LIBERTY is a concise, sweeping, relevant, entertaining and nonpartisan history that also is particularly relevant to America's immigration policies, past and present. Rife with poetry, raw ambition, political intrigue, ingenious artistry and engineering, it turns out the Lady's destiny was to be much more than just a magnificent monument.

Dim and Masi offer this book now because the Statue of Liberty, as a symbol of American beneficence, has never been more relevant…or in more jeopardy. They hope readers will gain a clear understanding of the Lady's value as well as how America has arrived at its present state.

ABOUT THE ARTIST AND WRITER:

Antonio Masi is a world-class and award-winning artist often honored for his depictions of bridges; his magnificent paintings are exclusively featured in the book New York’s Golden Age of Bridges. Masi is also president of the American Watercolor Society. His artistry has been featured in Artists Magazine, PBS/Sunday Arts, NBC/Today, Newsday, and many other venues. He also participated in The New York Times video City Living: A Tale of Two Bridges. A sought-after artistic master and scholar, he travels the world as a teacher, demonstrator, and lecturer.

Joan Marans Dim is a historian, novelist, and essayist. Her published work includes the novel Recollections of a Rotten Kid. She also has co-written two histories—the saga of NYU, Miracle on Washington Square, and New York’s Golden Age of Bridges. Her essays and op-eds have appeared in The New York Times, the New York Daily News, Barron’s, Investor’s Business Daily, HuffPost, and more. She also participated in The New York Times A Tale of Two Bridges video. Critics, citing the scope and depth of her work, describe her prose as laced with impressive depth, a droll wit, and an elegant narrative.

If you would like to receive a review copy or schedule an interview, please contact Jennifer Richards at Over the River Public Relations: 201-242-9637, [email protected].

LADY LIBERTY: An Illustrated History of America’s Most Storied Woman