IN THE SHADOW OF GENIUS: BROOKLYN BRIDGE AND ITS CREATORS PUBLISHES

“Her photographs have real ‘staying power’ like a true ‘Mensch’”
–Bruce Davidson, photographer 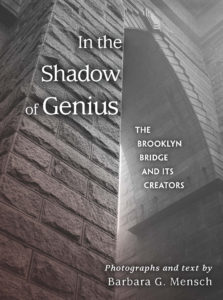 “The word ‘genius’ is used so indiscriminately in our culture that its meaning, even when applied to such masterworks as the Brooklyn Bridge, has become completely diminished,” says photographer Barbara Mensch.

In IN THE SHADOW OF GENIUS: The Brooklyn Bridge and Its Creators (Empire State Editions/Fordham University Press, hardcover; October 11, 2018; $34.95) Mensch combines her striking photographs with a powerful first-person narrative to cast a unique light on the concept of genius.

Says Mensch, “the obsession I had with capturing these images was in part my way of summoning up the great minds behind the work, and seeking some universal truths in the process. It was through the process of retracing their steps through history that I sought a greater understanding of the ingredients and characteristics needed to achieve a work of lasting significance.”

The book begins with Mensch’s personal experience of having lived for decades in the shadow of the Brooklyn Bridge, on the top floor of a 19th-century maritime warehouse. She then shares her personal quest to understand the brilliant minds and remarkable lives of those who built it: John, Washington and Emily Roebling (who was recently featured in The New York Times as a woman whose contributions had previously been overlooked.)

Following in their footsteps, Mensch traveled to Mulhausen, Germany, where John Roebling was born in 1806; to Saxonburg, Pennsylvania, where he established a utopian community in 1831; to Roebling aqueducts and bridges in Pennsylvania, Ohio and New York; and to the Civil War battlefield in Gettysburg, Pennsylvania, where Washington Roebling, a military engineer, valiantly served. Mensch concludes her evocative story with unique photographs of the Brooklyn Bridge, including neverbefore-seen images captured deep within the structure of the bridge.

IN THE SHADOW OF GENIUS builds upon David McCullough’s seminal book, The Great Bridge (1972), by introducing new documents unavailable to him, including letters, notes, and drawings. The letters shed light on the troubled relationship between John Roebling, the designer of the Brooklyn Bridge, and his son Washington, who became its chief engineer upon the sudden death of his father. Also included are moving passages of Washington Roebling’s Civil War memoirs, which are still only partially published.

This book is the second in a series. In the highly praised South Street (2009), Mensch documented her neighborhood in transition–the lower Manhattan waterfront below the Brooklyn Bridge–and captured the nocturnal gritty world of the men who worked the docks and storefronts of the Fulton Market. Over time her interest and passion for capturing images of the waterfront shifted to the Bridge itself, and in the period of the past several decades Mensch has created arguably one of the most comprehensive visual records of the Brooklyn Bridge, both inside and out.

ABOUT THE AUTHOR
Mensch is a contemporary photographer who probes her subject matter with the curiosity and stamina of a detective. Her widely regarded images have been the subject of numerous articles in numerous publications, including The New York Times, The Wall Street Journal, the New York Observer, and Time Out. She has published two books on New York’s legendary Fulton Market, now demolished, which she photographed under the scrutinizing eyes of federal law enforcement and the organized crime community.

Her work is represented by museums and collectors, including the Museum of Modern Art, the Museum of the City of New York, the Bibliotheque Nationale, Agnes Gund and Sir Elton John. Ms. Mensch is collaborating with producer Spike Jones Jr. on a miniseries for television based on her book.

If you would like to receive a review copy or schedule an interview, please contact
Jennifer Richards at Over the River Public Relations: 201-242-9637, [email protected]