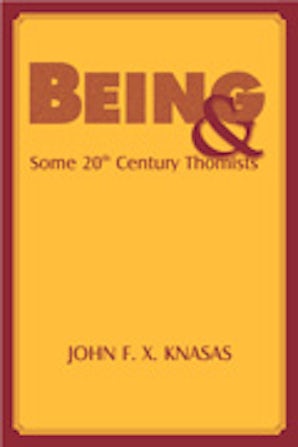 Being and Some 20th Century Thomists

In this powerfully argued book, Knasas engages a debate at the heart of the revival of Thomistic thought in the twentieth century. Richly detailed and illuminating, his book calls on the tradition established by Gilson, Maritain, and Owen, to build a case for Existential Thomism as a valid metaphysics.

Being and Some Twentieth-Century Thomists is a comprehensive discussion of the major issues and controversies in neo-Thomism, including issues of mind, knowledge, the human subject, free will, nature, grace, and the act of being. Knasas also discusses the Transcendental Thomism of Maréchal, Rahner, Lonergan, and others as he builds a carefully articulated case for completing the Thomist revival.

"Knas's book offers the definitve refutation of the claim that the epistemological and ontological foundations of Transcendental Thomism have a textual support in Aquinas, and simultaneously provides powerful philosophical arguments in defense of Thomistic Realism. - —Nova and Vetera