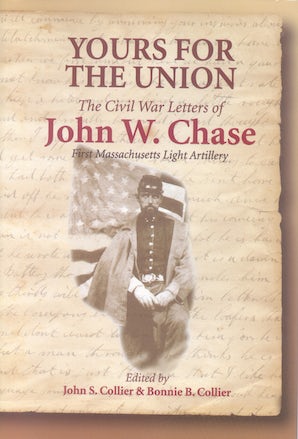 Yours for the Union

By (author) John S. Collier and Bonnie B. Collier

Yours for the Union is a collection of letters that takes us inside the life and mind of a Civil War soldier. John Chase's reports of his service with the Army of the Potomac, reveal what the war was really like for the men who fought it.

Chase was a 36 year-old cabinetmaker from Roxbury, a widower with four young children when he enlisted as a private in the First Massachusetts Light Artillery. These well written letters portray a man who is trying to provide for his children, maintain his finances, obtain food and clothing to supplement his meager rations, all while marching in the mud and fighting a war. While he was a patriotic Northerner, his occasionally crude language reflects his strong opinion of abolitionists, and especially, of abolitionist politicians.

Yours for the Union adds another valuable voice to the chorus. - —Jennifer L. Weber, Civilwarbookreview.com

Yours for the Union adds another valuable voice to the chorus.---—Jennifer L. Weber, Civilwarbookreview.com

By (author) Bonnie B. Collier

By (author) John S. Collier
John S. Collier, great-great grandson of John W. Chase, and Bonnie B. Collier are both retired and live in Maryland.