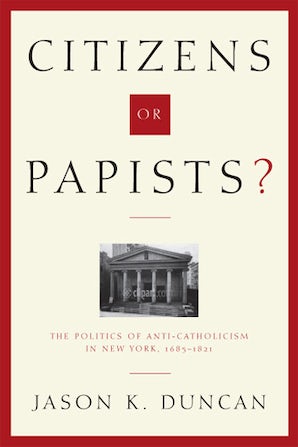 Based on careful work with rare archival sources, this book fills a gap in the history of New York Catholicism by chronicling anti-Catholic feeling in pre-Revolutionary and early national periods.

Colonial New York, despite its reputation for pluralism, tolerance, and diversity, was also marked by severe restrictions on religious and political liberty for Catholics. The logic of the American Revolution swept away the religious barriers, but Anti-Federalists in the 1780s enacted legislation preventing Catholics from holding office and nearly succeeded in denying them the franchise. The latter effort was blocked by the Federalists, led by Alexander Hamilton, who saw such things as an impediment to a new, expansive nationalist politics.

By the early years of the nineteenth century, Catholics gained the right to hold office due to their own efforts in concert with an urban-based branch of the Republicans, which included radical exiles from Europe. With the contributions of Catholics to the War of 1812 and the subsequent collapse of the Federalist Party, by 1820 Catholics had become a key part of the triumphant Republican coalition, which within a decade would become the new Democratic Party of Andrew Jackson and Martin Van Buren.

Lawson's study is well researched and his argument forceful." - —The Catholic Historical Review

...a valuable contribution to our understanding of politics and religion in early America. - —The Journal of American History

The author has done a fine job of re-creating this critical period in New York political and religious history. - —Journal of the Early Republic