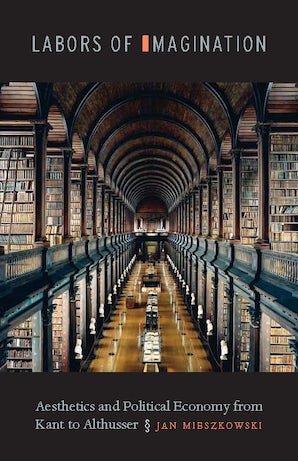 Aesthetics and Political Economy from Kant to Althusser

This book is a major new study of the doctrines of productivity and interest in Romanticism and classical political economy. The author argues that the widespread contemporary embrace of cultural historicism and the rejection of nineteenth-century conceptions of agency have hindered our study of aesthetics and politics. Focusing on the difficulty of coordinating paradigms of intellectual and material labor, Mieszkowski shows that the relationship between the imagination and practical reason is crucial to debates about language and ideology.

From the Romantics to Poe and Kafka, writers who explore Kant's claim that poetry "sets the imagination free" discover that the representational and performative powers of language cannot be explained as the products of a self-governing dynamic, whether formal or material. A discourse that neither reflects nor prescribes the values of its society, literature proves to be a uniquely autonomous praxis because it undermines our reliance on the concept of interest as the foundation of self-expression or self-determination. Far from compromising its political significance, this turns literature into the condition of possibility of freedom.

For Smith, Bentham, and Marx, the limits of self-rule as a model of agency prompt a similar rethinking of the relationship between language and politics. Their conception of a linguistic labor that informs material praxis is incompatible with the liberal ideal of individualism. In the final analysis, their work invites us to think about social conflicts not as clashes between competing interests, but as a struggle to distinguish human from linguistic imperatives.

Mieszkowski has produced an admirable study placing some of the major contributions of German culture over the past two centuries center stage—and in relation to the intriguing question of intellectual and cultural production. With striking intellectual generosity he has touched all the primary and most recent bases.---Henry Sussman, Yale University and University of Buffalo

At the conclusion of his stimulating and ambitious study, Prof. Mieszkowski summarizes what he hopes to have accomplished in the course of his readings. This is no small achievement. 'In this book, I have argued that reading the texts of classical political economy together with post-Kantian literature offers us important insights into some of the central controversies of contemporary cultural theory. Ideological debates in the humanities will benefit immeasurably once we recognize that philosophical inquiry is not a hindrance to but an essential ally of empirical history.' - Modern Language Notes

By (author) Jan Mieszkowski
Jan Mieszkowski is Associate Professor of German at Reed College. His most recent publications include essays on Derrida and Hegel, Benjamin, Kleist, and Joseph Beuys.