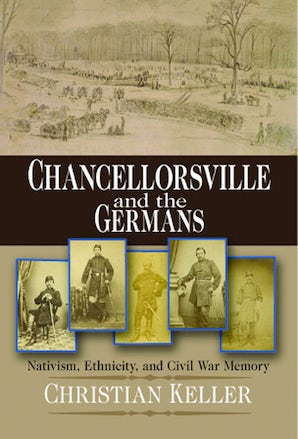 Chancellorsville and the Germans

By (author) Christian B. Keller

Often called Lee’s greatest triumph, the battle of Chancellorsville decimated the Union Eleventh Corps, composed of large numbers of German-speaking volunteers. Poorly deployed, the unit was routed by “Stonewall” Jackson and became the scapegoat for the Northern defeat, blamed by many on the “flight” of German immigrant troops. The impact on America’s large German community was devastating. But there is much more to the story than that.

Drawing for the first time on German-language newspapers, soldiers’ letters, memoirs, and regimental records, Christian Keller reconstructs the battle and its aftermath from the German-American perspective, military and civilian. He offers a fascinating window into a misunderstood past, one where the German soldiers’ valor has been either minimized or dismissed as cowardly. He critically analyzes the performance of the German regiments and documents the impact of nativism on Anglo-American and German-American reactions—and on German self-perceptions as patriots and Americans. For German-Americans, the ghost of Chancellorsville lingered long, and Keller traces its effects not only on ethnic identity, but also on the dynamics of inclusion and
assimilation in American life.

Authors & Distributors
Christian B. Keller is Professor of History at the United States Army War College in Carlisle, Pennsylvania. Along with many scholarly articles focusing on the ethnic experience in the Civil War, he is author of Chancellorsville and the Germans: Nativism, Ethnicity, and Civil War Memory (Fordham, 2007) and coauthor of Damn Dutch: Pennsylvania Germans at Gettysburg (Stackpole, 2004). He is currently editing and translating the memoirs of a German American soldier in the 41st New York.
Reviews

Christian B. Keller makes a powerful case for the battle of Chancellorsville's centrality to the German-American experience in the Civil War. Addressing questions relating to military and ethnic history, as well as to how the battle reverberated in German-American memories of the conflict, it reveals a complex dynamic of patriotism and alienation that played out over many years. Readers interested in the Civil War, German-Americans, and the formation of national allegiance and identity will turn to it with profit.---—Gary W. Gallagher, author of The Confederate War

Keller has added a highly valuable and much-needed revisionist work to Civil War historiography and to the study of ethnicity in nineteenth-century America. - —The Journal of Southern History

Discusses the events and aftermath of the May 1863 battle, in which the Union Army's Eleventh Corps, a force largely composed of German-speaking volunteers, was routed by Confederate troops; documents the role of nativism in criticism of the corps and explores responses in the German-American community. - —The Chronicle of Higher Education

. . . Superbly-written and detailed . . . Keller outlines with a clarity which few have done before him . . . - —Defense and Foreign Affairs Strategic Policy

By (author) Christian B. Keller
True