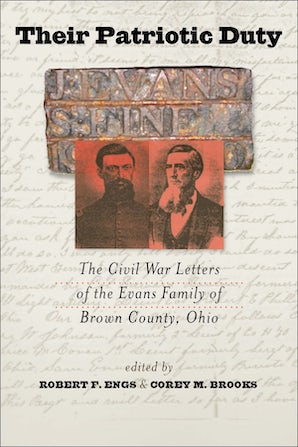 The Civil War Letters of the Evans Family of Brown County, Ohio

Many of the farm families in the river country of southern Ohio sent fathers, husbands, and sons to fight and die in the Civil War. Few families have bequeathed a record of that experience as remarkable as that created by the Evans family: an extraordinary collection of letters that offers a unique portrait of life both on the home front and on the front lines.

From his homestead near Ripley on the Ohio River, patriarch Andrew Evans sent two sons to war, and from 1862 to 1866 father and sons wrote each other hundreds of letters. Called “the soldier’s letters” by the family, this cache lay untouched in a barn until the 1980s, when Robert Engs was invited to edit them.

Here are 273 family letters, most between Andrew and son Samuel, that draw us into the complicated lives of a Midwestern family not just suffering the dislocations of war, but also experiencing—and describing in intimate detail—the sorrows and occasional joys of rural life in nineteenth-century America.

From the front lines with the 70th Ohio and, later, as an officer commanding a unit of “colored troops,” Samuel writes of the horrors of Shiloh, of the loneliness and fear of patrolling Union lines in Tennessee. Andrew writes of the seasons of rural life, of illness and deaths in the family, of the complicated politics of this borderland where abolitionists and “Copperhead” pro-slavery voices shared daily debates.

One of the very few collections of Civil War letters from home front and front lines, this meticulously edited book is an engrossing chronicle of war and peace, family and country, and an indispensable addition to the history of the Civil War.

An absorbing set of letters that tell us a lot about many aspects of the Civil War uncommonly mentioned in other publications. Copperhead sentiments, staunch defense of the Union cause, service in both white and black regiments, and Freedmen's Bureau work all became part of the mix when the varied members of the Evans family of Ohio sat down to write to their loved ones. - —Earl J. Hess, Lincoln Memorial University

The correspondents in this absorbing book include citizens who were fully
aware of the great conflict's historic significance. They treat the key
events of the War, illuminating the powerful connections between the
military world and the political sphere. This is a compelling source for
historians and general readers alike. The editors have made a marvelous
contribution to our knowledge of the War.

These Civil War letters from several members of the Evans family in the Union army and at home are some of the best I have read. The
letters between Sam Evans and his father Andrew illustrate the path taken by thousands of Union soldiers and their families from racism and allegiance to the Democratic party to champions of emancipation, black soldiers, equal rights, and the party of Lincoln.

A remarkable volume . . . An extraordinary collection of family correspondence spanning the Civil War . . . - —The Pennsylvania Gazette

Their Patriot Duty brings together a rare, revealing, and often riveting correspondence between two Union soldiers and their southern Ohio farm family that marks off the disruptions and daily rhythms of life at home against the shocks of battle and sufferings of the soldier's life. Students of borderlands will find the letters especially telling in their accounts of unionists and Copperheads squaring off and people struggling to make sense of emancipation, new assertions of federal power into local affairs, and the obligations of reconstructing the Union. These letters stand among the most compelling collections of any wartime correspondence. They give us the real war. - —Randall M. Miller, Saint Joseph's University

Edited: Corey M. Brooks
COREY M. BROOKS is a doctoral student in history at the University of California, Berkeley.

Edited: Robert F. Engs
Robert F. Engs is Professor of History at the University of Pennsylvania. His other books include Educating the Disenfranchised: Samuel Chapman Armstrong and Hampton Institute, 1939-1893; Freedom’s First Generation: Black Hampton, Virginia (Fordham); and, with Randall E. Miller, The Birth of the Grand Old Party: The Republicans’ First Generation.