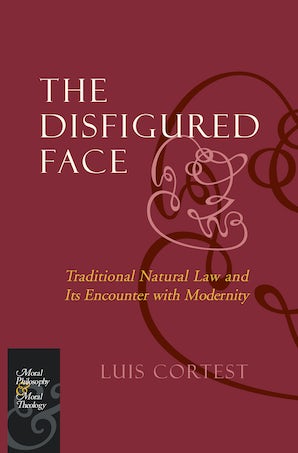 Traditional Natural Law and Its Encounter with Modernity

The central argument of this book is that the traditional notion of Natural Law has almost disappeared from the ethical and moral discourse of our time. For Thomas Aquinas, the author whose conception of Natural Law forms the foundation for the book, the ontological and ethical orders are not autonomous but inseparable-in effect, his ethical system is an "ontological morality." For Thomas, the ethical (practical wisdom) must be understood as an extension of the metaphysical (speculative wisdom).

Most modern philosophers, by contrast, consider these two orders to be entirely separate.
Here Luis Cortest shows how traditional Natural Law (the form Thomas Aquinas developed from classical and medieval sources) was transformed by thinkers like John Locke and Kant into a doctrine compatible with early modern and modern notions of nature and morality. In early Modern Europe one of the first of the great debates about moral philosophy took place in sixteenth-century Spain, as a philosophical dispute concerning the humanity of the Native Americans. This foreshadowed debates in later centuries, which the author reevaluates in light of these earlier sources. The book also includes a close examination of the recent work of scholars like John Finnis and Brian Tierney, who argue that traditional Natural Law theorists were defenders of a doctrine of positive rights. Rather than attempt to make the traditional doctrine compatible with modern rights theory, however, the author argues that traditional Natural Law must be understood as a form of pre-Enlightenment ontological morality that has survived the onslaught of modernity.

Authors & Distributors
Luis Cortest is Associate Professor of Spanish and Director of Medieval and Renaissance Studies at the University of Oklahoma. He is the author of Homenaje a José Durand and El arte para servir a Dios de Fray Alonso de Madrid: Estudio preliminar y notas.
Reviews

This brave and brilliant book is a must read. It is at once politically incorrect yet dead on target with its deep concern for an objective moral, legal, and political truth based upon a sound philosophy of being and nature. In historical context, Cortest describes natural law as it was developed by Thomas Aquinas and his 16th century Spanish disciples. He shows how this doctrine fared vis à vis modern secular philosophy and then goes further to show that traditional natural law doctrine has been preserved almost exclusively in papal encyclicals which have challenged modern secular culture.---—John P. Doyle, St. Louis University

A brief but brilliant book on the natural law. - —The Catholic World

“A significant contribution to natural law theory, especially to the study of the second scholasticism.”---—Anthony J. Lisska, Denison University

Remarkably balanced, Cortest’s The Disfigured Face is an excellent summary of the historical and theoretical vicissitudes of the natural law tradition. The author recovers not only the ideas but also a number of outstanding forgotten names from Cicero to Maritain, and puts into a new light the links between the Middle Ages and Renaissance, particularly the influential role of Francisco Suárez.---—Juan A. Mercado, Pontifical University of the Holy Cross

The Disfigured Face is a welcome contribution to the present discourse on the status and role of natural law in moral theology. - —The Thomist

By (author) Luis Cortest
Luis Cortest is Associate Professor of Spanish and Director of Medieval and Renaissance Studies at the University of Oklahoma. He is the author of Homenaje a José Durand and El arte para servir a Dios de Fray Alonso de Madrid: Estudio preliminar y notas.