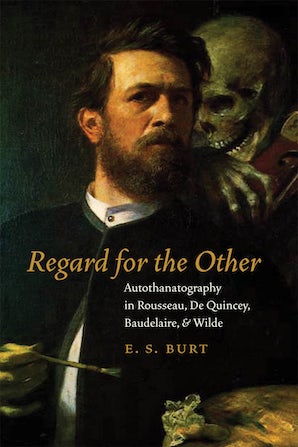 Regard for the Other

Although much has been written on autobiography, the same cannot be said of autothanatography, the writing of one's death. This study starts from the deconstructive premise that autobiography is aporetic, not or not only a matter of a subject strategizing with language to produce an exemplary identity but a matter also of its responding to an exorbitant call to write its death. The I-dominated representations of particular others and of the privileged other to whom a work is addressed, must therefore be set against an alterity plaguing the I from within or shadowing it from without. This alterity makes itself known in writing as the potential of the text to carry messages that remain secret to the confessing subject.

Anticipation of the potential for the confessional text to say what Augustine calls "the secret I do not know," the secret of death, engages the autothanatographical subject in a dynamic, inventive, and open-ended process of identification. The subject presented in these texts is not one that has already evolved an interior life that it seeks to reveal to others, but one that speaks to us as still in process. Through its exorbitant response, it gives intimations of an interiority and an ethical existence to come.

Baudelaire emerges as a central figure for this understanding of autobiography as autothanatography through his critique of the narcissism of a certain Rousseau, his translation of De Quincey's confessions, with their vertiginously ungrounded subject-in-construction, his artistic practice of self-conscious, thorough-going doubleness, and his service to Wilde as model for an aporetic secrecy.

The author discusses the interruption of narrative that must be central to the writing of one's death and addresses the I's dealings with the aporias of such structuring principles as secrecy, Levinasian hospitality, or interiorization as translation. The book makes a strong intervention in the debate over one of the most-read genres of our time.

In an extraordinarily demanding revision of the autobiographical genre, Brut zeroes in on how the subject engages with language not merely to produce an exemplary identity but to write its own demise . . . Highly recommended.---—K.M. Sibbald, McGill University

An adventurous, incisive, and vigorous work of reading and theory that aspires to engage its subject - the autobiographical 'I' understood in its relation to an otherness exceeding representation—at a high level of intellectual responsibility.---—Joshua Wilner, The City University of New York

Examines the shadowy forms of self that emerge in autobiography's call to represent the unrepresentable, or the subject's death. - —The Chronicle of Higher Education

Burt succeeds in the extraordinary task of revising scholarly
understanding of the genre of autobiography.

By (author) E.S. Burt
E. S. BURT is Professor of French and Comparative Literature at the University of California, Irvine. She is the author of Poetry’s Appeal: The Nineteenth-Century French Lyric and the Political Space.