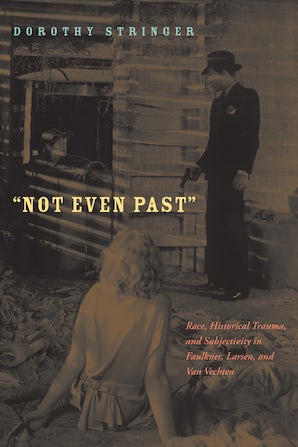 Not Even Past highlights references to nineteenth-century U.S. slavery and anti-Black racism in literary and photographic projects begun during the late 1920s and early 1930s, including novels by William Faulkner and Nella Larsen, and portraits by Carl Van Vechten. These texts share a representational crisis, in which distinctions between present, quotidian racism and a massive, fully racialized historical trauma disappear. All identify persistent historical traumatization with intense subjective states (including madness, religious ecstasy, narcissism, and fetishistic enjoyment), and each explores the conservative, even coercive social character of such links between psyche and history. When the past of enslavement is "not even past," narration freezes, black and white women lose their capacity to question or resist social and domestic violence, and racial politics fail.

Anticipating contemporary trauma studies by decades, these disparate modernists' works constitute not an expounded or avowed but an interstitial trauma theory, which finds its shape in the spaces left by conventional public discourse. Their works parallel important essays by psychoanalytic thinkers of the same era, including Joan Riviere, Sigmund Freud, Melanie Klein, and Walter Benjamin, and their joint explication of relationships among psyche, history, and race offers important resources for psychoanalytic approaches to racial difference today.

Despite their analytic acuity, however, Faulkner, Larsen, and Van Vechten also themselves carry the traumatic past forward into the future. Indeed, the two novelists' tragic depictions of a triumphant color line and the photographer's insistence on an idiom of black primitivism lent support to white supremacy in the twentieth century. Yet even in their very failure, three U.S. modernists tell us that it is not enough simply to exercise critical acuity on the marks of past violence. Reading, however masterly, cannot interrupt a history in the midst of repeating itself; it can only itself reiterate the disaster.

“This is the beginning of a cultural moment for critical studies of
race and trauma, and Stringer makes a timely and eloquent foray into that
field.”

“This is the beginning of a cultural moment for critical studies of
race and trauma, and Stringer makes a timely and eloquent foray into that
field.”