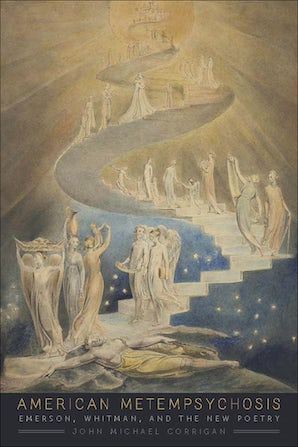 Emerson, Whitman, and the New Poetry

The “transmigration of souls is no fable. I would it were, but men and women are only half human.” With these words, Ralph Waldo Emerson confronts a dilemma that illuminates the formation of American individualism: to evolve and become fully human requires a heightened engagement with history. Americans, Emerson argues, must realize history’s chronology in themselves—because their own minds and bodies are its evolving record.

Whereas scholarship has tended to minimize the mystical underpinnings of Emerson’s notion of the self, his depictions of “the metempsychosis of nature” reveal deep roots in mystical traditions from Hinduism and Buddhism to Platonism and Christian esotericism. In essay after essay, Emerson uses metempsychosis as an open-ended template to understand human development.

In Leaves of Grass, Walt Whitman transforms Emerson’s conception of metempsychotic selfhood into an expressly poetic event. His vision of transmigration viscerally celebrates the poet’s ability to assume and live in other bodies; his American poet seeks to incorporate the entire nation into his own person so that he can speak for every man and woman.

American Metempsychosis is a valuable work that contributes an original reading of Emerson and Whitman. - —Arthur Versluis, author of American Transcendentalism and Asian Religions, The Esoteric Origins of the American Renaissance

Topics include how Emerson's view of the self reflects influences from Hinduism, Buddhism, Platonism, and Christian esotericism. - —The Chronicle Review

“The breadth of understanding is remarkable, the scholarship authoritative, and the imaginative implications for new work (by Corrigan and Corrigan's readers) is another Emersonian blessing.” - —Tony Brinkley, University of Maine