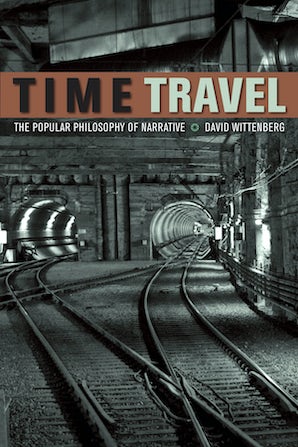 The Popular Philosophy of Narrative

This book argues that time travel fiction is a narrative “laboratory,” a setting for thought experiments in which essential theoretical questions about storytelling—and, by extension, about the philosophy of temporality, history, and subjectivity—are represented in the form of literal devices and plots.

Drawing on physics, philosophy, narrative theory, psychoanalysis, and film theory, the book links innovations in time travel fiction to specific shifts in the popularization of science, from evolutionary biology in the late 1800s, through relativity and quantum physics in the mid–20th century, to more recent “multiverse” cosmologies. Wittenberg shows how increasing awareness of new scientific models leads to surprising innovations in the literary “time machine,” which evolves from a “vehicle” used chiefly for sociopolitical commentary into a psychological and narratological device capable of exploring with great sophistication the temporal structure and significance of subjects, viewpoints, and historical events.

The book covers work by well-known time travel writers such as H. G. Wells, Edward Bellamy, Robert Heinlein, Samuel Delany, and Harlan Ellison, as well as pulp fiction writers of the 1920s through the 1940s, popular and avant-garde postwar science fiction, television shows such as “The Twilight Zone” and “Star Trek,” and
current cinema. Literature, film, and TV are read alongside theoretical work ranging from Einstein, Schrödinger, and Stephen Hawking to Gérard Genette, David Lewis, and Gilles Deleuze. Wittenberg argues that even the most mainstream audiences of popular time travel fiction and cinema are vigorously engaged with many of the same questions about temporality, identity, and history that concern literary theorists, media and film scholars, and philosophers.

Time Travel is extremely well research and has a lively style, which is a pleasure to read. Academically, this book is a vital source for anyone researching or studying time-travel literature; for those with a general interest in the theme will enjoy learning about how time travel literature has evolved and how, most importantly, it has engaged us as readers. - —Foundation: The International Review of Science Fiction

...[a] stimulating contribution to literary theory. - —London Review of Books

“A fruitful cross-pollination of theory and popular fiction, this is at once a careful genre study and a wide-ranging disquisition on narratology.”---—Rob Latham, University of California, Riverside

“An ambitious, synthetic book. Wittenberg’s brilliance lies in the comprehensive clarity with which he maps different discursive territories, and grasps how he can use time travel fiction to invent and practice, simultaneously, ‘a popular philosophy of narrative.’"---—Paul A. Harris, Loyola Marymount University

“A fruitful cross-pollination of theory and popular fiction, this is at once a careful genre study and a wide-ranging disquisition on narratology.” - —Rob Latham, University of California, Riverside

“An ambitious, synthetic book. Wittenberg’s brilliance lies in the comprehensive clarity with which he maps different discursive territories, and grasps how he can use time travel fiction to invent and practice, simultaneously, ‘a popular philosophy of narrative.’" - —Paul A. Harris, Loyola Marymount University

By (author) David Wittenberg
David Wittenberg is Associate Professor of English and Comparative Literature at the University of Iowa. He is the author of Philosophy, Revision, Critique: Rereading Practices in Heidegger, Nietzsche, and Emerson.