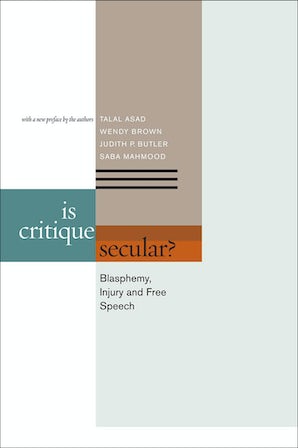 Preface by the Authors

This volume interrogates settled ways of thinking about the seemingly interminable conflict between religious and secular values in our world today. What are the assumptions and resources internal to secular conceptions of critique that help or hinder our understanding of one of the most pressing conflicts of our times?
Taking as their point of departure the question of whether critique belongs exclusively to forms of liberal democracy that define themselves in opposition to religion, these authors consider the case of the “Danish cartoon controversy” of 2005. They offer accounts of reading, understanding, and critique for offering a way to rethink conventional oppositions between free speech and religious belief, judgment and violence, reason and prejudice, rationality and embodied life. The book, first published in 2009, has been updated for the present edition with a new Preface by the authors.

I can't imagine a set of more rigorous, humane and insightful interlocutors on this vital aspect of the public sphere.---—Jonathan Boyarin, University of North Carolina-Chapel Hill

This conversation among Asad, Brown, Butler, and Mahmood offers an important snapshot of the rich debates on post-secularism and critiques of secularism. These essays provide succinct and accessible discussions of key issues in these debates.---—Annika Thiem, Villanova University

This original and provocative book is an invitation to go beyond political niceties and engage issues of religious difference with candor. Both scholarly and engaging, the book uplifts the level of public debate on the entanglement of religious and secular reasoning in the making of modern publics.---—Veena Das, Johns Hopkins University

By (author) Wendy Brown
Wendy Brown is Class of 1936 First Professor of Political Science at the University of California, Berkeley, where she is also affiliated with the Program in Critical Theory. Among her many book titles are Regulating Aversion: Tolerance in the Age of Empire and Identity (Princeton University Press, 2006), Walled States, Waning Sovereignty (Zone Books, 2010), Undoing the Demos: Neoliberalism’s Stealth Revolution (Zone Books, 2015), and In the Ruins of Neoliberalism: The Rise of Anti-Democratic Politics in the West (Columbia University Press, 2019).

By (author) Judith Butler
Judith Butler is Distinguished Professor in the Graduate School at the University of California, Berkeley. Their books include What World Is This? A Pandemic Phenomenology (2022); The Force of Nonviolence (2020); Toward a Performative Theory of Assembly (2015); Precarious Life: The Power of Mourning and Violence (2004); and Senses of the Subject (2015).

By (author) Saba Mahmood
Saba Mahmood (1962–2018) was a professor of anthropology at the University of California, Berkeley. Her work focused on questions of secularism, religion, gender, and embodiment. Her books include Politics of Piety: the Islamic Revival and the Feminist Subject (2004) and Religious Difference in a Secular Age: A Minority Report (2016).