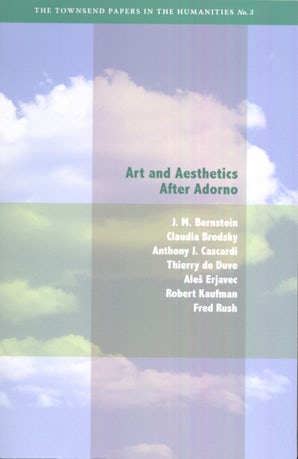 Art and Aesthetics after Adorno

Description
Theodor Adorno’s Aesthetic Theory (1970) offers one of the most powerful and comprehensive critiques of art and of the discipline of aesthetics ever written. The work offers a deeply critical engagement with the history and philosophy of aesthetics and with the traditions of European art through the middle of the 20th century. It is coupled with ambitious claims about what aesthetic theory ought to be. But the cultural horizon of Adorno’s Aesthetic Theory was the world of high modernism, and much has happened since then both in theory and in practice. Adorno’s powerful vision of aesthetics calls for reconsideration in this light. Must his work be defended, updated, resisted, or simply left behind? This volume gathers new essays by leading philosophers, critics, and theorists writing in the wake of Adorno in order to address these questions. They hold in common a deep respect for the power of Adorno’s aesthetic critique and a concern for the future of aesthetic theory in response to recent developments in aesthetics and its contexts.
Details

By (author) J. M. Bernstein
J. M. Bernstein is University Distinguished Professor of Philosophy at the New School for Social Research. His writings include The Fate of Art: Aesthetic Alienation from Kant to Derrida and Adorno (1992), Recovering Ethical Life: Jürgen Habermas and the Future of Critical Theory (1995), Adorno: Disenchantment and Ethics (2002), and Against Voluptuous Bodies: Late Modernism and the Meaning of Painting (2006). His most recent book is Torture and Dignity: An Essay on Moral Injury (2015). He is working on a manuscript with the tentative title Human Rights: On the Foundations of Ecological Socialism, from which the essay in this volume is drawn.

By (author) Claudia Brodsky
CLAUDIA BRODSKY is Professor of Comparative Literature at Princeton University. She is the author of The Imposition of Form: Studies in Narrative Representation and Knowledge, Lines of Thought: Discourse, Archetonics, and the Origin of Modern Philosophy and the editor, with Toni Morrison, of Birth of a Nation ’hood.