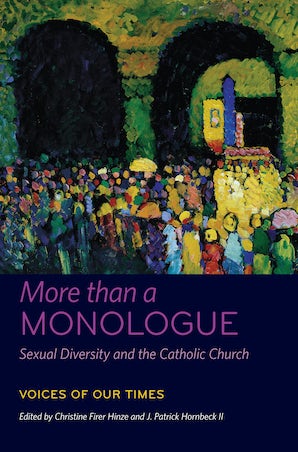 More than a Monologue: Sexual Diversity and the Catholic Church

Voices of Our Times

The Second Vatican Council’s landmark document Gaudium et spes called Catholics to cultivate robust, mutually enriching dialogue with the modern world by attentively and discerningly listening to the “voices of our times.” This distinctive new publication, the first of two volumes that explore sexual diversity and the Catholic Church, gathers an important set of these voices: the testimonies and reflections of Catholic and former Catholic LGBTQ (lesbian, gay, bisexual, transgender, and queer) persons, their friends, family members, and those who teach and accompany them.

Drawn from a series of conferences held in autumn 2011 and offering a spectrum of professional, generational, and personal perspectives, the essays in Voices of Our Times suggest the breadth and complexity of Catholic experiences of and engagements with sexual diversity. Each writer locates her or his reflections in careful attention to how ways of experiencing sexuality and speaking about sexual diversity are embodied in and shaped by particular practices—familial, interpersonal, professional, ecclesial, cultural, and political.

Part I, “Practicing Love,” introduces the voices of singles, families, couples, parents, and children who reflect on their experiences of sexual diversity in light of their experiences of Catholicism and of Catholics. Part II, “Practicing Church,” offers the perspectives of clergy and lay ministers, casting light on what pastoral workers, Catholic and otherwise, encounter as they walk with people who are grappling with issues of faith and sexuality. In Part III, “Practicing Education,” writers discuss their experiences with sexual diversity in Catholic educational settings as teachers, as students, and as witnesses to the lives, loves, and struggles of LGBTQ young adults. Finally, Part IV, “Practicing Belonging,” spotlights contributions by authors who have struggled with their identities and place within and around the Catholic community.

Striving to acknowledge, honor, and respect the truth and value embodied in both LGBTQ persons’ lives and in the Catholic tradition, this book provides a close-to-the-ground look at the state of the conversation about sexual diversity among contemporary Roman Catholics in the United States. Along with its companion volume, Inquiry, Thought, and Expression, Voices of Our Times represents a unique opportunity for readers inside and outside the Catholic community to engage in a conversation that is at once vibrant and complex, difficult and needed.

The texts in both volumes are of high quality in their sophisticated reflection and rigorous scholarship. Gathering together experience-based essays, papers that summarize and critique the arguments put forth in official Catholic teaching, and articles that present original ideas on issues relating to sexual diversity, the two volumes are a valuable resource for teaching sexuality, LGBTQ issues, theology, and Catholicism in the USA in the academic context, as well as being accessible to an interested lay audience.---—Stefanie Knauss, American Catholic Studies

The More Than in the title of these volumes indicates a commitment to move beyond the Monologue of ecclesiastical teaching on sexual diversity, and those who defend that teaching, and engage the voices and lived experiences of people. - —Theological Studies

More than a Monologue is a powerful, long overdue, scandalous account of the fact that many GLBTQ persons are persons of faith, even intense Christian faith, who have been and continue to be rejected by officials of the Catholic church, causing great suffering to themselves and all those who love and respect them. We may hope that ending the silence on this issue will help priests, bishops and cardinals find the courage to end this persecution and acknowledge what many know from personal experience: that sexual identity and orientation were not among the instructions that Jesus the Christ left his followers, and do not predict personal righteousness.---—Christine E. Gudorf, Florida International University

This book succeeds in making ecclesial space for LGBT Catholics…All of the contributors to this volume do more than simply speak back to church officials; they also, and perhaps more importantly, speak to and with other Catholics”---—Katie Grimes, Theology and Sexuality

A refreshing dialogue occurring within Catholicism regarding the lives of LBGTQ persons. Firer Hinze and Hornbeck, both professors at Fordham University, have collected a wide spectrum of essays regarding how LGBTQ individuals live out their sexual lives with dignity and authenticity. Included here are the testimonies of theologians, parents, pastors, and a physician, alongside Bishop Thomas Gumbleton and Dan Savage, the nationally syndicated sex columnist who shares an emotionally gripping story about growing up gay and Catholic. The personal nature of several of these essays makes the collection especially riveting. - —Publishers Weekly Starred Review