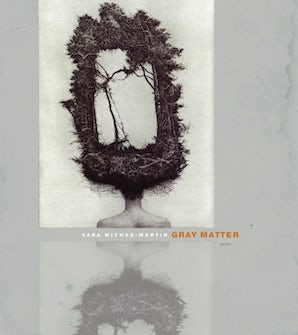 Simultaneously restless and enchanted, the primary speaker of these poems is a tourist in the truest sense. She finds herself on trains, in the backcountry of the American wilderness, in crowded European hostels, and in Vietnam, eating a partially fertilized egg. All the while, Michigan, the landscape of childhood, serves as
her reference point (“A rustic sort of place I can’t back away from”). Inspired by the Buddhist concept of anatta, or “no-self,” the speaker navigates unfamiliar terrain, sparking the question of identity and the agent of its construction.

The poems ask how through perception the body metabolizes experience. From this intersection the passionate investigation of consciousness takes flight, framing the slippage between thinking and being, the feast of the subconscious and the seeds planted from waking life, the impermanence of a given moment, versus the materialism of memory, the reality of isolation despite the presence of a crowd, the influence of culture versus biology’s common baseline.

Drawing from contemporary neuroscience and rare case studies, the poems illuminate the peculiar interrelated aspects of the mechanisms of the brain and personality. But there is nothing clinical about these poems, culled from dreams and memory fragments. The question of consciousness gives rise to the distinct human
ability to reflect, to invent. Which is what the poems—poignant, strange, radiating musicality—enact:

Not the love a mile underground
on a train that slows into the station
like a sore arm bending, but the kind
boarded on a ship and sailed hard
into the storm we’ve made of ourselves.
(from “Please do Not Touch”)

Gray Matter: 1. the material of the brain. 2. an expression naming an idea or situation held in shadow. This book tangles with the unknown, but also celebrates the seductive curiosity its mystery provokes. It is a love letter from the imagination to the scientists and philosophers who, despite remarkable attempts, still cannot locate
its source.

These poems are kaleidoscopic and pulsing; their living focus shows us that instability too has its elegance, that thought like music is in movement. This is a vibrant, beautifully synaptic book. - —Dean Young

This eloquent work offers the reader a rare mix of lyrical intensity and abstract rigor. These are poems of inner adventure and outward event, the one sometimes easing into the other like figures at dusk. The narratives here are compelling and the craft hard-earned, making for a wonderful debut collection. - —Eavan Boland

'Laughter in the pantry,' a deer's 'antlers askew,' an 'echo of high heels,' a lake of memory lapping—Michas-Martin conveys with startling clarity what only seems to have been lost. And those losses, with an eerie familiarity, are returned unto us, as our own. In these poems reader and author move together through kindred synapses of memory and desire as if the gray matter herein is shared or at least newly blown open for our mutual and wondrous scrutiny. The truth of Yeats' 'In dreams begins responsibility' finds us through a heartfelt voice and a steely eye. - —Nance Van Winckel

Michas-Martin is investigative and clear spoken in her debut collection, with a unified focus on the interior self and its interactions with both the utilitarian body and the external world. - —Publishers Weekly

Around the head / stirs a haze of gases" and "I’ll try this once more / despite everyday distortions," says Sara Michas-Martin, a poet who works stubbornly at Knowing and simultaneously examines the equipment and mechanisms by which we attempt to know. It is that stubborn, intrepid threading-the-needle-kind-of-thinking that makes the poems in Gray Matter fresh and reliable. These poems are personal,but not self-involved, intelligent but always accessible and humble about the fallibility of the intellect. She's our poet-as-explorer, doing the human fieldwork in the world, right in her own back yard. It is an illuminating experience to sit on her shoulder as she goes forward, reminding us what experience is: "impossible / to name directly / a scent that opens on you / like a fire alarm /carrot yanked clear out of the ground. - —Tony Hoagland

What do I know about poetry? Brains are my business. Well, I know this: great poetry takes the brain by surprise (not merely the reflective self) knocking the neurons out of kilter, just a little, but enough to shock them into fresh patterns of perception, if only for an instant. Gray Matter is an extraordinary collection. I read it, neurons a-buzz, in a single, absorbed sitting. I’m not sure that’s what one is supposed to do with poems as rich, visceral and playfully profound as these. But what do I know about poetry? - —Paul Broks, Neuropsychologist