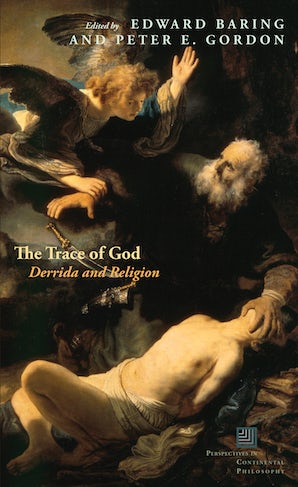 The Trace of God

Description
Derrida’s writings on the question of religion have played a crucial role in the transformation of scholarly debate across the globe. The Trace of God provides a compact introduction to this debate. It considers Derrida’s fraught relationship to Judaism and his Jewish identity, broaches the question of Derrida's relation to the Western Christian tradition, and examines both the points of contact and the silences in Derrida's treatment of Islam.
Reviews

“Edward Baring and Peter Gordon offer up to us an astonishingly fresh and vivid set of essays that not only cast new light on the work of the greatest philosophical provocateur of the late twentieth century but also provide food for reflecting today on the relations among violence, modernity, secularity, and religion.” - —Allan Megill, University of Virginia

“Edward Baring and Peter Gordon are to be commended for assembling such a
high-quality collection.”

Jacques Derrida’s most lasting legacy might well be his writings on religion, which not only restored the dialogue between religion and philosophy but also traced the entanglements of faith and knowledge, sacral and secular. If the perplexed seek a guide, they can do no better than this excellent volume. It explores Derrida’s engagements with religion across the entire span of his career and the vast range of his interests. Bringing together established voices and younger scholars, these essays highlight the complexity and ambiguity of Derrida’s thought and accentuate robust disagreements rather than harmonious consensus. - —Warren Breckman, University of Pennsylvania

Edited: Edward Baring
Edward Baring is Assistant Professor in Modern Europe an Intellectual and Cultural History at Drew University. He is the author of The Young Derrida and French Philosophy, 1945– 1968 (Cambridge University Press, 2011), which won the Morris D. Forkosch Prize from the Journal of the History of Ideas for Best Book in Intellectual History. He has written articles on Derrida and Sartre, which have appeared in Critical Inquiry, Modern Intellectual History, and elsewhere. He is currently working on a Europe- wide history of phenomenology in the period before 1950.

Edited: Peter E. Gordon
Peter E. Gordon is Amabel B. James Professor of History and Harvard College Professor at Harvard University, where he teaches modern Europe an intellectual history from the late eighteenth to the late twentieth century, focusing chiefly on themes in continental philosophy and social thought in Germany and France since the 1920s. His books include: Rosenzweig and Heidegger: Between Judaism and German Philosophy (University of California Press, 2003), which received three separate awards: the Salo W. Baron Prize from the Academy for Jewish Research, the Goldstein- Goren Prize for Best Book in Jewish Philosophy, and the Morris D. Forkosch Prize from the Journal of the History of Ideas for Best Book in Intellectual History. He has coedited several scholarly volumes, including The Modernist Imagination: Essays in Intellectual History and Critical Theory in Honor of Martin Jay (Berghahn, 2008); The Cambridge Companion to Modern Jewish Philosophy (Cambridge University Press, 2007); and Weimar Thought: A Contested Legacy (Princeton University Press, 2013). His most recent book was Continental Divide: Heidegger, Cassirer, Davos (Harvard University Press, 2010), which received the Jacques Barzun Prize from the American Philosophical Society. Gordon is founder and co- chair of the Harvard Colloquium for Intellectual History.