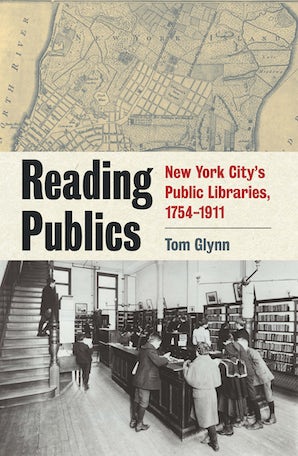 On May 11, 1911, the New York Public Library opened its “marble palace for book lovers” on Fifth Avenue and 42nd Street. This was the city’s first public library in the modern sense, a tax-supported, circulating collection free to every citizen. Since before the Revolution, however, New York’s reading publics had access to a range of “public libraries” as the term was understood by contemporaries. In its most basic sense a public library in the eighteenth and most of the nineteenth centuries simply meant a shared collection of books that was available to the general public and promoted the public good. From the founding in 1754 of the New York Society Library up to 1911, public libraries took a variety of forms. Some of them were free, charitable institutions, while others required a membership or an annual subscription. Some, such as the Biblical Library of the American Bible Society, were highly specialized; others, like the Astor Library, developed extensive, inclusive collections. What all the public libraries of this period had in common, at least ostensibly, was the conviction that good books helped ensure a productive, virtuous, orderly republic—that good reading promoted the public good.

Tom Glynn’s vivid, deeply researched history of New York City’s public libraries over the course of more than a century and a half illuminates how the public and private functions of reading changed over time and how shared collections of books could serve both public and private ends. Reading Publics examines how books and reading helped construct social identities and how print functioned within and across groups, including but not limited to socioeconomic classes. The author offers an accessible while scholarly exploration of how republican and liberal values, shifting understandings of “public” and “private,” and the debate over fiction influenced the development and character of New York City’s public libraries in the eighteenth and nineteenth centuries.

Reading Publics is an important contribution to the social and cultural history of New York City that firmly places the city’s early public libraries within the history of reading and print culture in the United States.

“A deeply researched, well-written, and solid contribution to library history literature that will interest not only members of the library profession but also scholars and students of intellectual, cultural, social, urban, and print culture history whose own research has been heavily influenced by the rich collections Glynn discusses.” - —Wayne Wiegand, Professor of Library and Information Studies Emeritus, Florida State University.

“For anyone studying the history of public libraries this will be an essential work of reference, but it is also full of interest for anyone wishing to know more of the social and cultural history of New York generally". - —Ian McGowan, Alexandria: The Journal of National and International Library and Information Issues

. . . Tom Glynn recalls how the libraries were transformed into a uniquely accessible resource through a public-private partnership made possible by Gilded Age philanthropy. - —Sam Roberts, The New York Times

By (author) Tom Glynn
TOM GLYNN is a librarian at Rutgers University, where he is the selector and liaison for British and American history, the history of science, American studies, and political science.