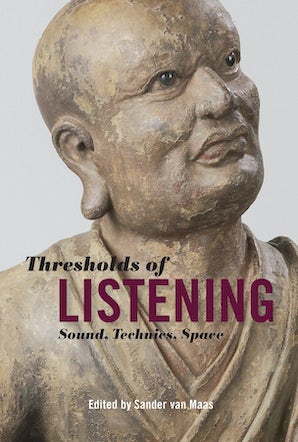 Thresholds of Listening addresses recent and historical changes in the ways listening has been conceived. Listening, having been emancipated from the passive, subjected position of reception, has come to be asserted as an active force in culture and in collective and individual politics.

The contributors to this volume show that the exteriorization of listening— brought into relief by recent historical studies of technologies of listening—involves a re-negotiation of the theoretical and pragmatic distinctions that underpin the notion of listening. Focusing on the manifold borderlines between listening and its erstwhile others, such as speaking, reading, touching, seeing, or hearing, the book maps new frontiers in the history of aurality. They suggest that listening’s finitude— defined in some of the essays as its death or deadliness—should be considered as a heuristic instrument rather than as a mere descriptor.

Listening emerges where it appears to end or to run up against thresholds and limits—or when it takes unexpected turns. Listening’s recent emergence on the cultural and theoretical scene may therefore be productively read against contemporary recurrences of the motifs of elusiveness, finitude, and resistance to open up new politics, discourses, and technologies of aurality.

“Thresholds of Listening intervenes into an extraordinarily wide range of subjects, ranging from masochism and torture at one extreme to Cage and Kafka at the other. Chapters zoom by at high speed, covering enormous ground and wrestling on all fronts with music’s potential value as a transformative biopolitical praxis. The level of scholarship is excellent, and van Maas’s cast of contributors includes stellar names alongside emerging scholars. This is less a book about listening to music than a virtuosic inquiry into the relationships between listening, hearing, sound, and space and an investigation of the limits of the human body.”---—Anthony Gritten, Royal Academy of Music

“Clearly the scholarship that underpins Thresholds of Listening is generally very thorough and ‘experimental,’ which tests conventional understandings of scholarship. Given its unique qualities, I would rate this book as an important contribution that will be useful across a number of disciplines, from musicology and music theory to philosophy and literary theory, but also touching upon certain strands of science.”---—Kenneth Gloag, Cardiff University