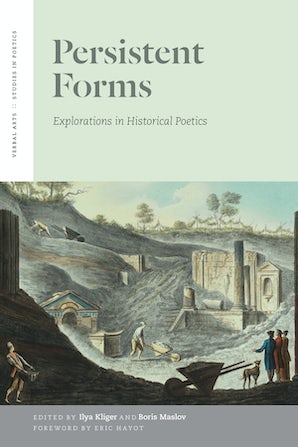 Since the mid-1980s, attempts to think history and literature together have produced much exciting work in the humanities. Indeed, some form of historicism can be said to inform most of the current scholarship in literary studies, including work in poetics, yet much of this scholarship remains undertheorized.

Envisioning a revitalized and more expansive historicism, this volume builds on the tradition of Historical Poetics, pioneered by Alexander Veselovsky (1838–1906) and developed in various fruitful directions by the Russian Formalists, Mikhail Bakhtin, and Olga Freidenberg. The volume includes previously untranslated texts of some of the major scholars in this critical tradition, as well as original contributions which place that tradition in dialogue with other thinkers who have approached literature in a globally comparatist and evolutionary-historical spirit. The contributors seek to challenge and complement a historicism that stresses proximate sociopolitical contexts through an engagement with the longue durée of literary forms and institutions. In particular, Historical Poetics aims to uncover deep-historical stratifications and asynchronicities, in which formal solutions may display elective affinities with other, chronologically distant solutions to analogous social and political problems.

By recovering the traditional nexus of philology and history, Persistent Forms seeks to reinvigorate poetics as a theoretical discipline that would respond to such critical and intellectual developments as Marxism, New Historicism, the study of world literature, practices of distant reading, and a renewed attention to ritual, oral poetics, and genre.

Foreword: Eric Hayot
Eric Hayot is Distinguished Professor of Comparative Literature and Asian Studies at Pennsylvania State University. He is the author of Chinese Dreams (Michigan, 2004), The Hypothetical Mandarin (Oxford, 2009), On Literary Worlds (Oxford, 2012), and The Elements of Academic Style (Columbia, 2014).

Ilya Kliger is Associate Professor of Russian and Slavic Studies at New York University. He is the author of The Narrative Shape of Truth: Veridiction in Modern European Literature (Penn State University Press,
2011), as well as articles dealing with the history and theory of the novel in Russia and France, literary theory, and narratology. Currently, he is working on a book on the tragic social imaginary in the age of Russian Realism.

Edited: Boris Maslov
Boris Maslov is Assistant Professor of Comparative Literature at the University of Chicago. He has published articles on Homer and Archaic Greek lyric, the reception of the Pindaric ode, history of comparative literature, and historical semantics of Greek and Russian. He is the author of the forthcoming book, Pindar and the Emergence of Literature.