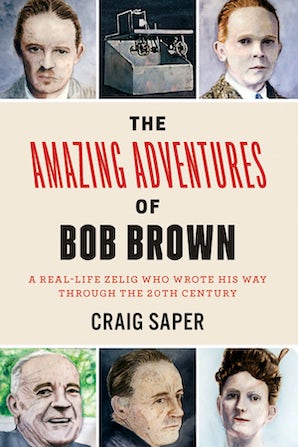 The Amazing Adventures of Bob Brown

Contemporary publishing, e-media, and writing owe much to an unsung hero who worked in the trenches of the culture industry (for pulp magazines, Hollywood films, and advertising) and caroused and collaborated with the avant-garde throughout the first half of the twentieth century. Robert Carlton Brown (1886–1959) turned up
in the midst of virtually every significant American literary, artistic, political, and popular or countercultural movement of his time—from Chicago’s Cliff Dweller’s Club to Greenwich Village’s bohemians and the Imagist poets; from the American vanguard expatriate groups in Europe to the Beats. Bob Brown churned out pulp fiction and populist cookbooks, created the first movie tie-ins, and invented a surreal reading machine more than seventy-five years ahead of e-books. He was a real-life Zelig of modern culture.

With The Amazing Adventures of Bob Brown, Craig Saper disentangles, for the first time, the many lives and careers of the intriguing figure behind so much of twentieth-century culture. Saper’s lively and engaging yet erudite and subtly experimental style offers a bold new approach to biography that perfectly complements his multidimensional subject. Readers are brought along on a spirited journey with Bob and the Brown clan—Cora (his mother), Rose (his wife), and Bob, a creative team who sometimes went by the name of CoRoBo—through globetrotting, fortune-making and fortune-spending, culture-creating and culture-exploring adventures. Along the way, readers meet many of the most important cultural figures and movements of the era and are witness to the astonishingly prescient vision Brown held of the future of American cultural life in the digital age.

“Outstanding. In many ways, this is much more than a biography of one Bob Brown; it is a biography of a lost twentieth century.” - —Craig Dworkin, The University of Utah

Bob Brown, a mostly forgotten figure of the first half of the twentieth century, was nonetheless an original, one of the most colorful and versatile individuals of his time. Publisher, inventor, poet, cookbook writer, pulp fiction writer, self-proclaimed 'fiction machine,' revolutionary, world traveler, Greenwich Village bohemian, European expatriate –- you name it and Brown lunged at it with both hands. Though today largely a footnote to other people’s stories, Brown has finally gotten a book of his own, a meticulously researched work that traces the rollicking life and times of a larger-than-life individual while also offering a whirlwind tour through every important cultural and political movement of his era. - —Constance Rosenblum, author of Gold Digger: The Outrageous Life and Times of Peggy Hopkins Joyce

“A cross between an intellectual biography of this literary dynamo and a picaresque novel. Bob Brown has found a sensitive, insightful, and appreciative biographer who not only knows how to narrate (and condense) his amazing adventures but also how to draw the connections that make this overflowing life of letters seem all the more meaningful and significant in our era of digital multimedia.” - —Louis Kaplan, University of Toronto

By (author) Craig Saper
Craig Saper is Professor in the Language, Literacy, and Culture Doctoral Program at UMBC.