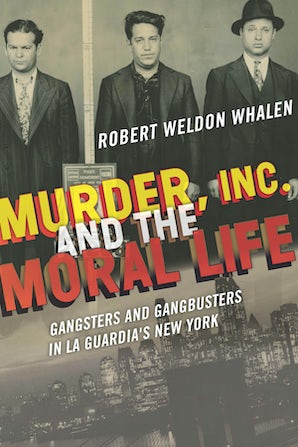 News of the trial proliferated throughout the country; at times it received more newspaper coverage than the unabated war being waged overseas. The heinous crimes attributed to Murder, Inc., included not only murder and torture but also auto theft, burglary, assaults, robberies, fencing stolen goods, distribution of illegal drugs, and just about any “illegal activity from which a revenue could be derived.” When the trial finally came to a stunning unresolved conclusion in November 1941, newspapers generated record headlines.

The Murder, Inc., story is as much a tale of morality as it is a gangster history, and Murder, Inc., and the Moral Life by Robert Whalen meshes both topics clearly and meticulously, relating the gangster phenomenon to modern moral theory. Each chapter covers an aspect of the Murder, Inc., case and reflects on its ethical elements and consequences. Whalen delves into the background of the criminals involved, their motives, and the violent death that surrounded them; New York City’s immigrant gang culture and its role as “Gangster City”; fiery politicians Fiorello La Guardia and Thomas E. Dewey and the choices they made to clean up the city; and the role of the gangster in popular culture and how it relates to “real life.” Whalen puts a fresh spin on the two topics, providing a vivid narrative with both historical and moral perspective.

...An ethical prism to explore the cinematic, sociological and political implications of contract killings, during an era of ethnic succession when Jewish gangs and Italian organized crime were dominant. - The New York Times

Murder, Inc., and the Moral Life: Gangsters and Gangbusters in La Guardia’s New York is a keen account of organized crime during the first half of the twentieth century. Most significant is the book’s integral, cogent analysis of the unfortunate marriage of criminality, in all of its diversity, and the general population’s fascination with it. A must-read for anyone interested in the complex story of gangsterism in the United States!---Anthony Julian Tamburri, Dean, John D. Calandra Italian American Institute

In Murder, Inc. and the Moral Life, Robert Weldon Whalen connects the real gangsters to the 'reel' gangsters and the forces that shaped and fought them. He explores our fascination with the gangster figure through the moral and ethical questions that helped to shape American culture for the past one hundred years. With sound research, good clear writing, and a critical sense of history, Whalen adds new dimensions to the study of this truly unique American archetype of crime and masculinity.---Fred Gardaphe, Distinguished Professor of English and Italian American Studies, Queens College/CUNY, From Wiseguys to Wise Men