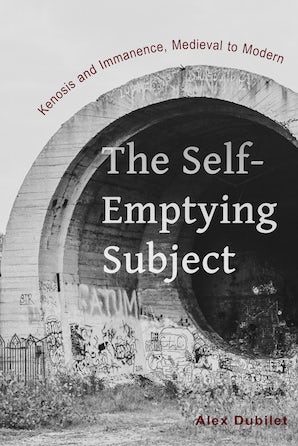 Against the two dominant ethical paradigms of continental philosophy–Emmanuel Levinas’s ethics of the Other and Michel Foucault’s ethics of self-cultivation—The Self-Emptying Subject theorizes an ethics of self-emptying, or kenosis, that reveals the immanence of an impersonal and dispossessed life “without a why.” Rather than aligning immanence with the enclosures of the subject, The Self-Emptying Subject engages the history of Christian mystical theology, modern philosophy, and contemporary theories of the subject to rethink immanence as what precedes and exceeds the very difference between the (human) self and the (divine) other, between the subject and transcendence. By arguing that transcendence operates and subjects life in secular no less than in religious domains, this book challenges the dominant distribution of concepts in contemporary theoretical discourse, which insists on associating transcendence exclusively with religion and theology and immanence exclusively with modern secularity and philosophy.

The Self-Emptying Subject argues that it is important to resist framing the relationship between medieval theology and modern philosophy as a transition from the affirmation of divine transcendence to the establishment of autonomous subjects. Through an engagement with Meister Eckhart, G.W.F. Hegel, and Georges Bataille, it uncovers a medieval theological discourse that rejects the primacy of pious subjects and the transcendence of God (Eckhart); retrieves a modern philosophical discourse that critiques the creation of self-standing subjects through a speculative re-writing of the concepts of Christian theology (Hegel); and explores a discursive site that demonstrates the subjecting effects of transcendence across theological and philosophical operations and archives (Bataille). Taken together, these interpretations suggest that if we suspend the antagonistic relationship between theological and philosophical discourses, and decenter our periodizing assumptions and practices, we might encounter a yet unmapped theoretical fecundity of self-emptying that frees life from transcendent powers that incessantly subject it for their own ends.

The Self-Emptying Subject: Kenosis and Immanence, Medieval to Modern is lucid, timely, and important. Dubilet explores kenosis as a radical possibility for life—where we may find an immanent joy not dependent on a future redemption. Meticulous and original readings of Meister Eckhart, Friedrich Hegel, and Georges Bataille ground the exploration. This is a fantastically worthwhile book for scholars and students of kenosis, subjectivity, divine immanence, or any of the historical figures that it explores.---Karmen MacKendrick, Le Moyne College

In this important book, Dubilet recharges immanence via Deleuze and others to fashion a kenotic subject without transcendence. Based on cutting-edge scholarship, these ground-breaking interpretations of Eckhart, Hegel, and Bataille constitute a significant intervention into contemporary continental philosophy of religion and theology.---Clayton Crockett, University of Central Arkansas

1. Meister Eckhart’s Kenotic Lexicon and the Undoing of Finitude

2. Conceptual Experimentation with the Divine: Expression, Univocity, and Immanence in Meister Eckhart
3. From Estrangement to Entäußerung: Undoing the Unhappy Consciousness in the Phenomenology of Spirit