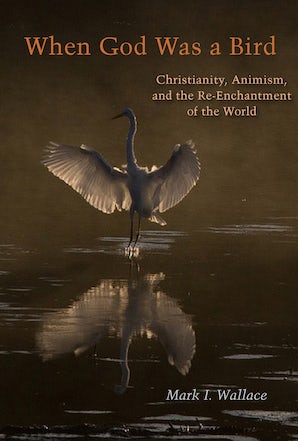 By (author) Mark I. Wallace

In a time of rapid climate change and species extinction, what role have the world’s religions played in ameliorating—or causing—the crisis we now face? Religion in general, and Christianity in particular, appears to bear a disproportionate burden for creating humankind’s exploitative attitudes toward nature through unearthly theologies that divorce human beings and their spiritual yearnings from their natural origins. In this regard, Christianity has become an otherworldly religion that views the natural world as “fallen,” as empty of signs of God’s presence.

And yet, buried deep within the Christian tradition are startling portrayals of God as the beaked and feathered Holy Spirit – the “animal God,” as it were, of historic Christian witness. Through biblical readings, historical theology, continental philosophy, and personal stories of sacred nature, this book recovers the model of God in Christianity as a creaturely, avian being who signals the presence of spirit in everything, human and more-than-human alike.

Mark Wallace’s recovery of the bird-God of the Bible signals a deep grounding of faith in the natural world. The moral implications of nature-based Christianity are profound. All life is deserving of humans’ care and protection insofar as the world is envisioned as alive with sacred animals, plants, and landscapes. From the perspective of Christian animism, the Earth is the holy place that God made and that humankind is enjoined to watch over and cherish in like manner. Saving the environment, then, is not a political issue on the left or the right of the ideological spectrum, but, rather, an innermost passion shared by all people of faith and good will in a world damaged by anthropogenic warming, massive species extinction, and the loss of arable land, potable water, and breathable air. To Wallace, this passion is inviolable and flows directly from the heart of Christian teaching that God is a carnal, fleshy reality who is promiscuously incarnated within all things, making the whole world a sacred embodiment of God’s presence, and worthy of our affectionate concern.

This beautifully and accessibly written book shows that “Christian animism” is not a strange oxymoron, but Christianity’s natural habitat. Challenging traditional Christianity’s self-definition as an other-worldly religion, Wallace paves the way for a new Earth-loving spirituality grounded in the ancient image of an animal God.

Seldom do I read a book with such verve and audacity as When God Was a Bird. Mark Wallace has given us a treasure, almost in the form of a parable, because if God is manifest in a bird—the Holy Spirit as dove—where else might God be found? And what might that radical, even creation-wide incarnation of God mean for us today? Highly recommended---Brian D. McLaren, author of The Great Spiritual Migration

This book brings forth a luminous animism for all to see, previously hidden in the scriptures and traditions of Christianity yet embedded in the body of the Earth itself. We are all indebted to Mark Wallace who has given us a masterpiece of eco-theology rendered in the most elegant and accessible poetic language. A gift for years to come!---Mary Evelyn Tucker, Yale Forum on Religion and Ecology

Mark Wallace argues that ‘Christian animism’ is not a contradiction in terms. In doing so, he opens new lines of exploration and insight that have the potential to spark fundamental changes in the ways animists and Christians think of each other and themselves. An important contribution.---Norman Wirzba, Duke Divinity School

A good blend of theological exploration and personal accounts of encountering the sacred in the world of nature, the book offers a creative and thoughtful reframing of Christian thought and practice in light of the current ecological dilemma. - Choice

This is an inspired text that will surely give flight to a host of new patterns, pathways, and destinations for those bold enough to follow its lead. - Interpretation: A Journal of Bible and Theology

...Wallace's proposals remain intriguing and his work demonstrates the importance of further engagement with, and analysis of, the relationship between Christianity and indigenous religions, animism and environmentalism. - Environmental Values

...Wallace believes there’s an animistic understanding of the world deep within Christianity—and that it’s vital we recover it now. An anthropocentric Christianity has helped create the conditions for our planetary ecological crisis. Only once we recognize the spirit of God in wood thrushes and great blue herons, says Wallace, will we be able to respond appropriately. - Broadview Magazine

When God Was a Bird combines personal stories, nature writing, biblical interpretations, historical theology, and Continental philosophy. As such, a wide range of readers will find it interesting and accessible. It is also beautifully written. The book not only is a provocative treatment of the subject matter but also displays the unflagging generosity with which Wallace treats his students, his colleagues, his scholarly sources, and his readers. Wallace demonstrates not only how to treat the natural world but also how to treat one another. - Reading Religion

A striking meditation on what it is to be human in a divine world... - H-Net Reviews

. . .Wallace raises important points for eco-theology and challenges the status quo in contemporary and traditional pneumatology. As such, theologians, Bible scholars, clergy, and seminary students would do well to read this book. - Religious Studies Review

4. “Come Suck Sequoia and Be Saved” 113
John Muir’s Christianimism • Indian Removal in Yosemite •
The Great Code • The Water Ouzel • The Two Books •
Sequoia Religion • “Christianity and Mountainanity Are
Streams from the Same Fountain”

5. On the Wings of a Dove 141
Sagebrush Requiem • Is Earth a Living Being? • Suffering Earth •
Refreshment and Fragrance in the Hills • A Tramp for God •
The Death of God • God on the Wing

By (author) Mark I. Wallace
Mark I. Wallace is Professor of Religion and Environmental Studies at Swarthmore College and core faculty for the U.S. State Department’s Institutes on Religious Pluralism at Temple University. His books include Green Christianity: Five Ways to a Sustainable Future and Finding God in the Singing River: Christianity, Spirit, Nature.