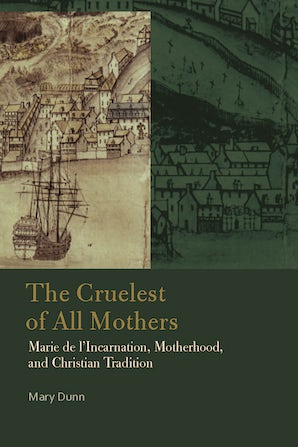 The Cruelest of All Mothers

In 1631, Marie Guyart stepped over the threshold of the Ursuline convent in Tours, leaving behind her eleven-year-old son, Claude, against the wishes of her family and her own misgivings. Marie concluded, “God was dearer to me than all that. Leaving him therefore in His hands, I bid adieu to him joyfully.” Claude organized a band of schoolboys to storm the convent, begging for his mother’s return. Eight years later, Marie made her way to Quebec, where over the course of the next thirty-three years she opened the first school for Native American girls, translated catechisms into indigenous languages, and served some eighteen years as superior of the first Ursuline convent in the New World. She would also maintain, over this same period, an extensive and intimate correspondence with the son she had abandoned to serve God.

The Cruelest of All Mothers is, fundamentally, an explanation of Marie de l’Incarnation’s decision to abandon Claude for religious life. Complicating Marie’s own explication of the abandonment as a sacrifice carried out in imitation of Christ and in submission to God’s will, the book situates the event against the background of early modern French family life, the marginalization of motherhood in the Christian tradition, and seventeenth-century French Catholic spirituality. Deeply grounded in a set of rich primary sources, The Cruelest of All Mothers offers a rich and complex analysis of the abandonment.

The Cruelest of Mothers is a unique book, unlike anything I have read before. It defies disciplinary or methodological boundaries. On the contrary, like a Russian nesting doll, it contains layers within layers: being at once a deeply personal, confessional work, a historical analysis, a theological work, and a long and profound meditation upon subjectivity and scholarship.---Emma Anderson, University of Ottawa,

Extraordinary: beautifully written, theoretically daring, and a model of scholarly dedication. The Cruelest of All Mothers takes readers on an incredible journey to understand the relationship between the French mystic, Marie de l’Incarnation and the son she abandons for God, Claude Martin. But more than that, Dunn reads the abandonment as a brilliant scholar of Christianity, and shows how Marie echoes a longstanding (but seldom acknowledged) tradition that tethers female sanctity to the renunciation of their children. She also boldly draws from a contemporary critical theory and from her own personal experience as a mother, and dares to think how we might re-think the place of motherhood today. Taken together, the book is rich with historical and theoretical insight, moving, and deeply compelling. It lingered with me for days, and is sure to enrich our own conversations about gender, religion, and the history of Christianity. A gem!---Brenna Moore, Fordham University,

“A daring project of an unexpected intimacy between two women separated by almost half a millennium. It interlaces Mary Dunn’s own moving process of meaning-making of family hardships with a thoughtful historical interpretation of the most painful and intriguing moment of the life of St. Marie Guyart of the Incarnation (1599-1672): when she abandoned her only son to answer the call of her God. Informed by Pierre Bourdieu’s understanding of the range of human action as much as by Julia Kristeva’s hypothesis on maternal sacrifice, Mary Dunn reflects on Marie Guyart’s agency as a mother, a widow and a mystic in a world where religious and devote women were deeply influenced by the French Catholic spirituality of self-surrender.”---Dominique Deslandres, Professor, Department of History, Université de Montréal,

A fascinating study of motherhood and the Christian tradition as exemplified by the life of a 17th-century Ursuline nun, Marie de l’Incarnation. - Catholic Herald

1 Explication: Representations of the Abandonment in the Relations, the Letters, and the Vie 21

3 Explanation: The Marginalization of Motherhood in the Christian Tradition 71

4 Explanation: Maternal Hagiographies and Spiritualities of Abandonment in Seventeenth-Century France 98

5 Motherhood Refigured: Kristeva, Maternal Sacrifice, and the Imitation of Christ 124

By (author) Mary Dunn
Mary Dunn is an Assistant Professor of Early Modern Christianity at St. Louis University. Her first book, From Mother to Son: Selected Letters from Marie de l’Incarnation to Claude Martin, was published by Oxford University Press in 2014. She has also published articles in the Canadian Historical Review, Quebec Studies, and the Journal of Feminist Studies in Religion, among other journals.