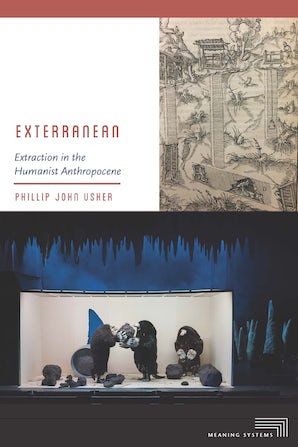 Extraction in the Humanist Anthropocene

Exterranean concerns the extraction of stuff from the Earth, a process in which matter goes from being sub- to exterranean. By opening up a rich archive of nonmodern texts and images from across Europe, this work offers a bracing riposte to several critical trends in ecological thought.

By shifting emphasis from emission to extraction, Usher reorients our perspective away from Earthrise-like globes and shows what is gained by opening the planet to depths within. The book thus maps the material and immaterial connections between the Earth from which we extract, the human and nonhuman agents of extraction, and the extracted matter with which we live daily.

Eschewing the self-congratulatory claims of posthumanism, Usher instead elaborates a productive tension between the materially-situated homo of nonmodern humanism and the abstract and aggregated anthropos of the Anthropocene. In dialogue with Michel Serres, Bruno Latour, and other interdisciplinary work in the environmental humanities, Usher shows what premodern material can offer to contemporary theory. Examining textual and visual culture alike, Usher explores works by Ronsard, Montaigne, and Rabelais, early scientific works by Paracelsus and others, as well as objects, engravings, buildings, and the Salt Mines of Wieliczka. Both historicist and speculative in approach, Exterranean lays the groundwork for a comparative ecocriticism that reaches across and untranslates theoretical affordances between periods and languages.

Usher’s brilliant study is a richly argued, erudite yet lyrical ode to the stuff of which the Earth is made. Exterranean engages with the record of human earthly entanglements in early modern European humanism, but always with a view to counterbalancing current distancing and idealizing views of a globe that is all surface, and no depth. By channeling the voices and agencies of Earth’s nonhuman subterranean elements in all their omnipresent intimacy, Usher thus reconnects us not merely to the history of knowledge and beliefs about the Earth and its contents, but to our own fragile planet. - Karen Raber, University of Mississippi

For anyone who might be suffering from Anthropocene fatigue, this is a book to jolt you from your slumbers. What happens to the globe when we shift attention from the outward projection of emissions to extraction ? The earth we thought we knew, and were already mourning, takes on a stunning new critical light. - Claire Colebrook, Pennsylvania State University