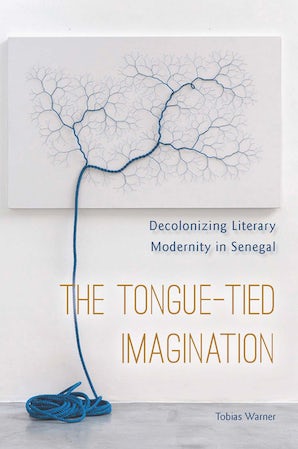 Should a writer work in a former colonial language or in a vernacular? The language question was one of the great, intractable problems that haunted postcolonial literatures in the twentieth century, but it has since acquired a reputation as a dead end for narrow nationalism. This book returns to the language question from a fresh perspective. Instead of asking whether language matters, The Tongue-Tied Imagination explores how the language question itself came to matter.

Focusing on the case of Senegal, Warner investigates the intersection of French and Wolof. Drawing on extensive archival research and an under-studied corpus of novels, poetry, and films in both languages, as well as educational projects and popular periodicals, the book traces the emergence of a politics of language from colonization through independence to the era of neoliberal development. Warner reads the francophone works of well-known authors such as Léopold Senghor, Ousmane Sembène, Mariama Bâ, and Boubacar Boris Diop alongside the more overlooked Wolof-language works with which they are in dialogue.

Refusing to see the turn to vernacular languages only as a form of nativism, The Tongue-Tied Imagination argues that the language question opens up a fundamental struggle over the nature and limits of literature itself. Warner reveals how language debates tend to pull in two directions: first, they weave vernacular traditions into the normative patterns of world literature; but second, they create space to imagine how literary culture might be configured otherwise. Drawing on these insights, Warner brilliantly rethinks the terms of world literature and charts a renewed practice of literary comparison.

Warner’s use of a vast array of theoretical tools reveals him to be a jack-of-all-trades, master of all. His archival research is solid and he has a strong grasp and sense of history as well a real sensitivity to text. On the surface, his written style seems simple and elegant, but, in fact, he has a gift for expressing complex concepts clearly without being reductionist. Finally, Warner brings into his discussions so many aspects of Senegalese literature and its background that his book will be an indispensable reference for many years to come. - Journal of the African Literature Association

Intellectually capacious and calmly magisterial, this remarkable book uses the case of French and Wolof in Senegal to remake ideas about literature and translation. This exquisite book will be read for decades to come—a decisive intervention from Africa into debates on world literature.---Isabel Hofmeyr, New York University

Warner’s groundbreaking book is a patient, thorough, and always clear and elegant examination of the way the language question haunts the production of Senegal’s literary tradition. At the same time, it poses in new terms the question of literature and of world literature.---Souleymane Bachir Diagne, Columbia University

In this comprehensive review of arguments regarding the authenticity of literature written in Wolof (the vernacular language of Senegal, Gambia, and Mauritania) or in French (the language of the former colonizers), Warner reframes the debate and poses an age-old—and critical—question about audience. For whom and to whom is writing addressed, and for what purpose?... Recommended. - Choice

Tobias Warner has written an elegant and masterful book that goes a long way towards realizing the goal of its subtitle... As a major intervention on decolonizing world literature, this excellent book deserves a wide audience. - French Studies

...Warner amply demonstrates the fundamental need for scholarly and imaginative critical reflection on multilingualism (beyond European languages) as an integral element of world literary studies... This is a hugely useful and readable book which should find its place on many undergraduate and postgraduate course reading lists in African, French, world and comparative literatures. - Bulletin of Francophone Postcolonial Studies

Note on Orthography and Pronunciation, ix

1. The Fetish of Textuality: David Boilat’s Notebooks and the Making of a Literary Past, 33

2. Para-literary Authorship: Colonial Education and the Uses of Literature, 51

3. Toward the Future Reader: Print Networks and the Question of the Audience, 96

6. How Mariama Bâ Became World Literature: Translation and the Legibility of Feminist Critique, 181

7. Aesthetics After Austerity: Boubacar Boris Diop and the Work of Literature in Neoliberal Senegal, 203

Epilogue. Out of Time: Decolonization and the Future of World Literature, 233

By (author) Tobias Warner
Tobias Warner is Assistant Professor of French and Francophone Studies at the University of California, Davis.