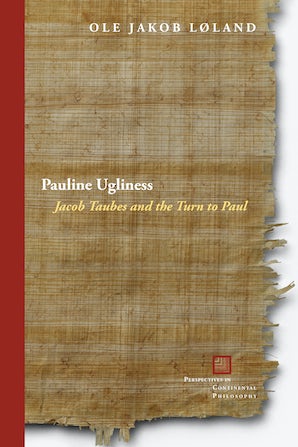 In recent decades Giorgio Agamben, Alain Badiou, and Slavoj Žižek have shown the centrality of Paul to western political and philosophical thought and made the Apostle a central figure in left-wing discourses far removed from traditional theological circles. Yet the recovery of Paul beyond Christian theology owes a great deal to the writings of the Jewish rabbi and philosopher Jacob Taubes (1923–1987).

Pauline Ugliness shows how Paul became an effective tool for Taubes to position himself within European philosophical debates of the twentieth century. Drawing on Nietzsche’s polemical readings of the ancient apostle as well as Freud’s psychoanalysis, Taubes developed an imaginative and distinct account of political theology in confrontations with Carl Schmitt, Theodor Adorno, Hans Blumenberg, and others. In a powerful reconsideration of the apostle, Taubes contested the conventional understanding of Paul as the first Christian who broke definitively with Judaism and drained Christianity of its political potential. As a Jewish rabbi steeped in a philosophical tradition marked by European Christianity, Taubes was, on the contrary, able to emphasize Paul’s Jewishness as well as the political explosiveness of his revolutionary doctrine of the cross.

This book establishes Taubes’s account of Paul as a turning point in the development of political theology. Løland shows how Taubes identified the Pauline movement as the birth of a politics of ugliness, the invention of a revolutionary criticism of the ‘beautiful’ culture of the powerful that sides instead with the oppressed.

Authors & Distributors
Ole Jakob Løland is a postdoctoral researcher in theology at the University of Oslo. He is the author of The Reception of Paul the Apostle in the Works of Slavoj Žižek.
Reviews

Pauline Ugliness situates Taubes’s work in a way that contributes importantly to the lines of connection across many thinkers in a number of related disciplines. It also proposes new ideas, particularly in political theology, that will be valuable original contributions.---Karmen MacKendrick, Le Moyne College,

Pauline Ugliness consistently and admirably explicates the relationship between history and philosophy within Taubes’s interpretation of Paul. I learned a great deal from Løland’s brilliant and creative explorations.---Tim Luckritz Marquis, Virginia Commonwealth University,

1 The Historical and the Philosophical: A Contemporary Scene | 13

2 Jacob Taubes’s Path to Paul: From the Eschatologist to the Paulinist | 22

By (author) Ole Jakob Løland
Ole Jakob Løland is a postdoctoral researcher in theology at the University of Oslo. He is the author of The Reception of Paul the Apostle in the Works of Slavoj Žižek.