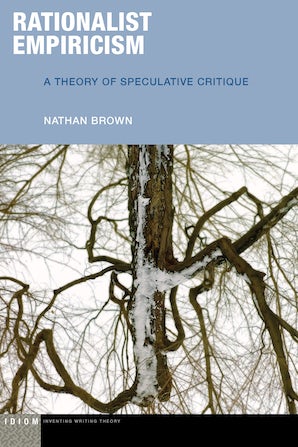 A Theory of Speculative Critique

Twenty-first-century philosophy has been drawn into a false opposition between speculation and critique. Nathan Brown shows that the key to overcoming this antinomy is a re-engagement with the relation between rationalism and empiricism. If Kant’s transcendental philosophy attempted to displace the opposing priorities of those orientations, any speculative critique of Kant will have to re-open and consider anew the conflict and complementarity of reason and experience. Rationalist Empiricism shows that the capacity of reason and experience to extend and yet delimit each other has always been at the core of philosophy and science. Coordinating their discrepant powers, Brown argues, is what enables speculation to move forward in concert with critique.

Sweeping across ancient, modern, and contemporary philosophy, as well as political theory, science, and art, Brown engages with such major thinkers as Plato, Descartes, Hume, Hegel, Marx, Heidegger, Bachelard, Althusser, Badiou, and Meillassoux. He also shows how the concepts he develops illuminate recent projects in the science of measurement and experimental digital photography. With conceptual originality and argumentative precision, Rationalist Empiricism reconfigures the history and the future of philosophy, politics, and aesthetics.

Authors & Distributors
Nathan Brown is Associate Professor of English and Canada Research Chair in Poetics at Concordia University, Montreal, where he directs the Centre for Expanded Poetics.
Reviews

Exhibiting extraordinary range and depth, Nathan Brown takes on the most important philosophical issues of our time: the relation between reason and reality, sapience and sentience, the possibility of revolution and the material conditions of freedom. Inviting serious debate on fundamental questions, this book reawakens our sense of the true, the good, and the beautiful.---Martin Hägglund, author of This Life,

Rationalist Empiricism advances a wholly original and utterly convincing philosophical position, brilliantly bringing together studies in visual art, science, politics, and the history of philosophy. This will be one of the most important theoretical works of the past twenty years or more. It represents a renewal of theory in the best possible sense.---Audrey Wasser, author of The Work of Difference,

1. Absent Blue Wax: On the Mingling of Methodological Exceptions | 35

3. Hegel’s Cogito: On the Genetic Epistemology of Critical Metaphysics | 73

6. The Technics of Prehension: On the Photography of Nicolas Baier | 141

7. Where’s Number Four? The Place of Structure in Plato’s Timaeus | 166

8. Badiou after Meillassoux: The Politics of the Problem of Induction | 185

9. The Criterion of Immanence and the Transformation of Structural Causality:
From Althusser to Théorie Communiste | 204

10. The Analytic of Separation: History and Concept in Marx | 228

Conclusion: The True, the Good, the Beautiful | 249

By (author) Nathan Brown
Nathan Brown is Associate Professor of English and Canada Research Chair in Poetics at Concordia University, Montreal, where he directs the Centre for Expanded Poetics.