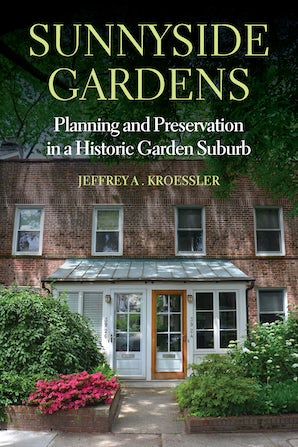 By (author) Jeffrey A. Kroessler

Illustrated by Laura A. Heim

The first book devoted to this landmark of architecture, urban planning, and social engineering

Situated in the borough of Queens, New York, Sunnyside Gardens has been an icon of urbanism and planning since its inception in the 1920s. Not the most beautifully planned community, nor the most elegant, and certainly not the most perfectly preserved, Sunnyside Gardens nevertheless endures as significant both in terms of the planning principles that inspired its creators and in its subsequent history. Why this garden suburb was built and how it has fared over its first century is at the heart of Sunnyside Gardens.

Reform-minded architects and planners in England and the United States knew too well the social and environmental ills of the cities around them at the turn of the twentieth century. Garden cities gained traction across the Atlantic before the Great War, and its principles were modified by American pragmatism to fit societal conditions and applied almost as a matter of faith by urban planners for much of the twentieth century. The designers of Sunnyside— Clarence Stein, Henry Wright, Frederick Ackerman, and landscape architect Marjorie Cautley—crafted a residential community intended to foster a sense of community among residents.

Richly illustrated throughout with historic and contemporary photographs as well as architectural plans of the houses, blocks, and courts, Sunnyside Gardens first explores the planning of Sunnyside, beginning with the English garden-city movement and its earliest incarnations built around London. Chapters cover the planning and building of Sunnyside and its construction by the City Housing Corporation, the design of the homes and gardens, and the tragedy of the Great Depression, when hundreds of families lost their homes. The second section examine how the garden suburbs outside London have been preserved and how aesthetic regulation is enforced in New York. The history of the preservation of Sunnyside Gardens is discussed in depth, as is the controversial proposal to place the Aluminaire House, an innovative housing prototype from the 1930s, on the only vacant site in the historic district.

Sunnyside Gardens pays homage to a time when far-sighted and socially conscious architects and planners sought to build communities, not merely buildings, a spirit that has faded to near-invisibility

Queens, in Jeffery Kroessler’s telling, is a borough of urban utopias, as he shows in this definitive, well-written history of Sunnyside Gardens, tracing its history from when it was a gleam in the eyes of its visionary planners, through its heyday, to its complicated post-utopian history. There are many treasures to be found in this book, including a fascinating account of For those interested in the history of intentional communities, in the conflicting visions of those two squabbling giants of twentieth-century urbanism, Lewis Mumford (a one-time Sunnyside Gardens resident) and Jane Jacobs, and for the sorely neglected history of the borough of Queens, Sunnyside Gardens is a must-read.---Peter Eisenstadt, author of Rochdale Village: Robert Moses, 6,000 Families, and New York City’s Great Experiment in Integrated Housing,

A sweeping transatlantic story of utopian design and community struggles. Kroessler's excellently researched and illustrated work brings alive the twentieth-century fight for a more livable city. Sunnyside Gardens was always more than small brick homes and tree-lined streets. It was, as Kroessler so ably demonstrates, an alternative America.---Nicholas Dagen Bloom, editor of Affordable Housing in New York: The People, Places, and Policies That Transformed a City,

Introduction: Sunnyside Gardens and the Garden City Idea:
A Cityscape for Urban Reform | 1

I. Planning
1 The Garden City and the Garden Suburb in Great Britain | 17
2 The Garden Suburb in New York | 32
3 Planning and Building Sunnyside Gardens | 47
4 Design and Community: Architecture and Landscape as a Social Good | 67
5 Building on Success: Radburn and Phipps Garden Apartments | 86
6 Foreclosure: The Great Depression and the End of a Dream | 101
7 Envisioning the Future City | 115

II. Preservation
8 Preserving the Historic Garden Suburb in London and New York | 129
9 Preserving Sunnyside Gardens | 143
10 The Fight for the Historic District | 160
11 A Question of Appropriateness: The Aluminaire House Controversy | 178

Conclusion: A Second Century for the Garden Suburb | 193

By (author) Jeffrey A. Kroessler
Jeffrey Kroessler is a Professor at the Lloyd Sealy Library, John Jay College of Criminal Justice, CUNY, and author of The Greater New York Sports Chronology; New York, Year by Year: A Chronology of the Great Metropolis; Historic Preservation in Queens; and other works.