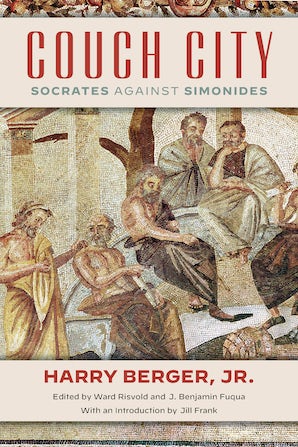 Crowning six decades of literary, rhetorical, and historical scholarship, Harry Berger, Jr., offers readers another trenchant reading. Berger subverts the usual interpretations of Plato’s kalos kagathos, showing Socrates to be trapped in a double ventriloquism, tethered to his interlocutors’ speech acts even as they are tethered to his.

Plato’s Republic and Protagoras both reserve a small but significant place for a poet who differs from Homer and Hesiod: the lyric poet Simonides of Ceos. In the Protagoras, Socrates takes apart a poem attributed to Simonides and uses this to finish off the famous and supposedly dangerous sophist, Protagoras. Couch City is a close reading of the comic procedures Socrates deploys against Protagoras as he reduces him to silence. But it also shows that Socrates takes the danger posed by Protagoras and his fellow sophists seriously. Even if they are represented as buffoons, sophists are among the charismatic authority figures—poets, rhapsodes, seers, orators, and lawgivers—who promote views harmful to Athenian democracy. Socrates uses Simonides’s poem to show how sophists not only practice misinterpretation but are unable to defend against it.

Berger ports his roots as a pioneering literary theorist into this rhetorical discussion, balancing ideas such as speech-act theory with hard-nosed philology. The result is a provocative and counterintuitive reassessment of Plato’s engagement with democracy.

“Harry Berger has done it again. His ever-sharp vision has once more pierced through the opacities of plodding scholarship about the debates of Plato’s Socrates about poets and their poetry. Yes, these poets and their defenders were foils for Plato, but they were in real life Socrates’ most worthy intellectual match. Berger’s portrait of Simonides as viewed by Protagoras is translucent—yet another masterpiece achieved by a true master of Platonic exegesis.”---Gregory Nagy, Harvard University,

“This is an outstanding work by a truly exceptional scholar and critic of the European literary and cultural heritage. The particular advantage of this book is its searching attentiveness to parts of the Protagoras that no one has ever had a good idea what to make of.This work demonstrates the value of interpretations of Plato that employ true literary expertise. Berger knows about poetics, about discourse analysis, about rhetorics of fiction, about narratology, about the phenomenology of performance, and about other complexities of the representation of human agents in literary and dramatic media, and he uses his expertise adroitly in eliciting implications of the Platonic text that have eluded commentators less attuned to that text’s literary features.”---Jay Farness, Northern Arizona University,

“Berger’s provocative interpretation of the Protagoras is guided by his immensely capacious reading practice, which trains his inimitable historical, literary, and sensorial energies on the implicities and complicities of the dialogue’s language, on what he calls its “agonistic surfaces” and “mnemonic triggers.” Attending to the Protagoras’s preoccupation with face, Berger gives face to ainigma, allusion, ambivalence, ambiguity, amphiboly, and analogy (staying, in the interest of space, with the letter “a”), taking these sites of instability as prompts to shift from logic to ethics and rhetoric, and as occasions for heightened philosophic and dramatic scrutiny. Berger subjects to similar scrutiny the invalid arguments and rhetorical misfires that punctuate the Protagoras but that Socrates’s interlocutors often fail to mark.”---Jill Frank, from the Introduction,

Part II: The Protagoras
6 Macrological Mystification: Protagoras’s Myth | 109
7 The Ethics of Etceteration | 123
8 The Parts of Gold and the Parts of Face | 130
9 Sophistry as Safemindedness in the Protagoras | 143