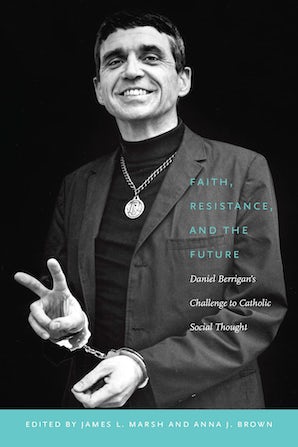 This book presents Daniel Berrigan’s contribution and challenge to catholic social thought. His contribution lies in his consistent, comprehensive, theoretical, and practical approach to issues of social justice and peace over the past fifty years. His challenge lies in his critique of capitalism, imperialism, and militarism, inviting Catholic activists and thinkers to undertake not just a reformist but a radical critique of and alternative to these realities. The aim of this book is, for the first time, to make Berrigan’s thought and life available to the academic Catholic community, so that a fruitful interaction takes place. How does this work enlighten and challenge such a community?

To these ends, the editors have recruited scholars and thinker-activists already familiar with and sympathetic to Berrigan’s work and those who are less so identified. The result is a rich, engaging, and critical treatment of the meaning and impact of his work. What kind of challenge does he present to academic-business-as-usual in
Catholic universities? How can the life and work of individual Catholic academics be transformed if such persons took Berrigan’s work seriously—theoretically and practically? Do Catholic universities need Berrigan’s vision to fulfill more integrally and completely their own missions? Does the self-knowing subject and theorist need to become a radical subject and theorist?

Even though the appeal of academics is important and perhaps primary, because of the range and depth of Berrigan’s work and thought and the power of his writing there is a larger appeal to the Catholic community and to activists working for social justice and peace. This book has, therefore, not only a theoretical and academic
appeal but also a popular and grassroots appeal.

Given the current and ongoing U.S. military interventions in Iraq, Afghanistan, and Libya, Berrigan’s work invites us to think about the justice of such interventions or, given the destructiveness of modern weapons, whether the notion of just war makes any sense. Given the recent crisis on Wall Street, does it make sense any
longer to talk about the possibility of a just capitalism? Given the most recent revelations about Guantánamo, Abu Ghraib, and Bagram, is it not imperative to think about how torture, preventative detention, and extraordinary rendition serve the ends of empire? In light of all of this, doesn’t Berrigan’s call for a pacific, prophetic community of justice rooted in the Good News of the Gospel make compelling sense?

Anna J. Brown is chair of the Political Science Department and director of the Social Justice Program at Saint Peter’s University.

In a brief review essay, one cannot do justice to the breadth of scholarship presented in this volume. - —American Catholic Studies

“Explores a fundamental tension concerning the role of the political within Catholic social thought, and considers Berrigan's work within the broader discussion of social justice.”---—Carol Joy Gordon, Fairfield University

[Berrigan's] writings, and especially his poetry, remain insightful, powerful, and prophetic to this day. His words are uplifting in their consistent Christian ethic, but horrifyingly still relevant, even decades later. - —Journal of Catholic Education

“Explores a fundamental tension concerning the role of the political within Catholic social thought, and considers Berrigan's work within the broader discussion of social justice.” - —Carol Joy Gordon, Fairfield University