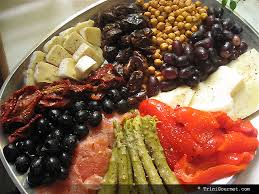 Whenever I think of my Greenwich Village holiday dinners now, I think of how different the childhood celebrations of my Italian-American traditions were from most Americans. We always started with an antipasto of Genoa salami, olives, anchovies, and roasted red peppers, bathed in olive oil with thin slivers of garlic to perk up the dish. We followed that with ravioli, then the roast—turkey for Thanksgiving and beef for Christmas. For Thanksgiving, the roast would be accompanied by mashed potatoes, stuffing, artichokes, a couple of other vegetables, finocchio and a salad. For dessert, we always had Italian pastries like cannoli and sfogliatelle from Ferrara’s on Grand Street, a huge fruit bowl topped with red grapes, dried figs stuffed with walnuts, a tray of mixed nuts, roasted chestnuts and espresso with a splash or two of anisette. Of course, wine flowed throughout the meal. Torrone, the almond nougat covered in a wafer that looked like Holy Communion, was given to the children. Of course, all the Italian Americans of Greenwich Village must have been serving pretty much the same menu with ravioli prepared in the morning and stored on beds with covered towels to keep them moist until the mid-afternoon repast.

That’s why when Professor Donna Gabaccia wrote her introduction to a sub-section on food in our book, American Woman, Italian Style, I could relate to so much of what she wrote. She notes that cultural choices are made in a people’s cuisine and that “food and cooking are powerful expressions of our ties to the past and to our current identity.”