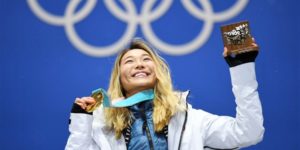 On February 12th, Chloe Kim won the gold medal in women’s half pipe at the Pyeongchang Winter Olympics. Even with a fall in her second run, her score was so much higher than her competitors’ that she had already secured the gold–but she wanted to “one-up herself.” Chloe landed back-to-back 1080s in her third run to achieve a final score of 98.25, blowing her competition out of the water. She was too young to compete in Sochi in 2014, but even then she could have been a contender for gold. With her unbeatable attitude, winning smile, and relatable tweets, Chloe has captured the hearts of fans around the globe. 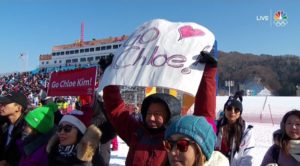 Mr. Kim and his heartfelt sign. Photo courtesy of NBC.

While Chloe’s skill and charisma are enough to win over any crowd, fans are further drawn to her story because of her parents, Jong Jin and Boran Yun Jim, who proudly waved a homemade sign cheering on their daughter. The Kims immigrated from South Korea to California, and Mr. Kim learned to snowboard alongside Chloe. Chloe’s grandmother, who lives in Seoul, also came to watch her compete. In the tense, competitive atmosphere, Chloe’s warm relationship with her family is a breath of fresh air. 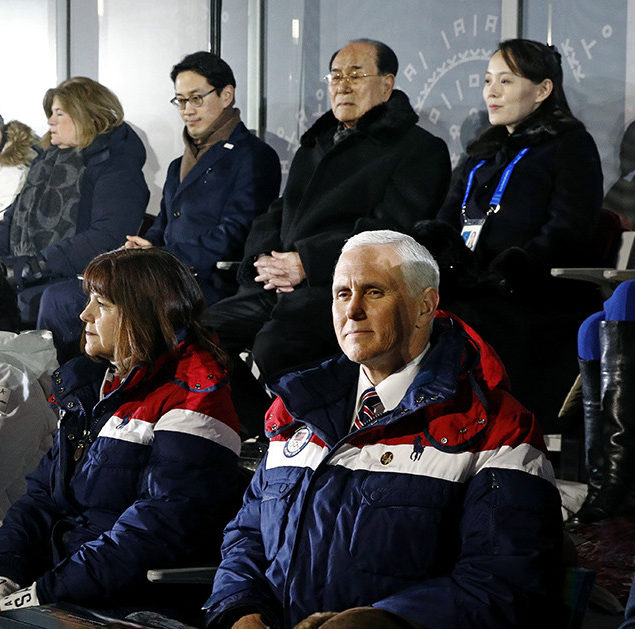 The Pyeongchang games have not only been exciting thus far; they are also serving a diplomatic purpose, as the United States and South Korea continue peace talks with North Korea. North and South Korea are participating as a unified team in these games, signalling hope for future developments. Kim Yo Jong, Kim Jong Un’s sister and North Korea’s vice director of propaganda and agitation, sat behind U.S. Vice President Mike Pence at the opening ceremonies. While South Korea is likely footing the $2.7 million bill for the North Korean athletes, it could be a small price to pay for successful peace negotiations. 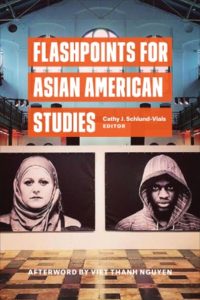 Affairs with North Korea have seemed so bizarre they have been almost laughable, but this makes Asian-American relations more important now than ever. Cathy J. Schlund-Vials and Viet Thanh Nguyen’s book Flashpoints for Asian American Studies from Fordham University Press discusses the uniqueness of Asian American studies, from its protest beginnings to the inherent limitations it faces as the discipline progresses. “Unequivocally, Flashpoints for Asian American Studies investigates the multivalent ways in which the field has at times and—more provocatively, has not—responded to various contemporary crises, particularly as they are manifest in prevailing racist, sexist, homophobic, and exclusionary politics at home, ever-expanding imperial and militarized practices abroad, and neoliberal practices in higher education.” Only time will tell if the Pyeongchang Olympics will truly catalyze a healing process between North and South Korea, but in the meantime, examining trans-Pacific international affairs through the lens of Asian-American studies can help inform us on how to best approach this complex geopolitical relationship.

At a time when tensions between the United States and North Korea are so high, with South Korea caught in the middle, Chloe Kim and the Olympics are a symbol of the beautiful things that happen when Asia and America come together.