An Extraordinary Opportunity to Understand the Vision of a Great Pastor 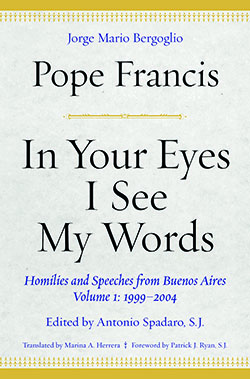 “We must advance toward an idea of truth that is ever more inclusive, less restrictive; at least, if we are thinking about God’s truth and not some human truth, however solid it may appear to us. God’s truth is unending; it is an ocean of which we can barely see the shore. . . .The truth is a gift that is too big for us, and that is precisely why it makes us bigger, amplifies us, raises us up. ”—Pope Francis

When Jorge Mario Bergoglio was elected the 266th pope of the Roman Catholic Church in March 2013, stories of his humility were everywhere. News circulated about the fact that he returned to the boarding house where he had been staying to pay his bill personally, rather than send an assistant, and that he chose to live in a simple two-room apartment rather than in the luxurious papal accommodations in the Vatican’s Apostolic Palace.

These actions gave the public a chance to learn something about the nature of the new pontiff. But what can be learned from his words? Readers of English will soon find out, as Pope Francis’s collection of homilies and speeches from Buenos Aires from 1999 to 2004 will be released on September 24, 2019, by Fordham University Press.

In Your Eyes I See My Words (Fordham University Press, 9780823285600, September 2019, $34.95, Cloth) is the first of a three-volume translation of Pope Francis’s theological, pastoral, anthropological, and educational thoughts. It is the first time these homilies and speeches have been printed in English.

The book provides insights into the mind and theological unfolding of a beloved spiritual leader who has challenged politicians, culture-makers, the media moguls—even his own ordained and lay church ministers—to live a life of faithfulness marked by justice, equality, and concern for the needs of everyone.

Jorge Mario Bergoglio, Pope Francis (Author) Pope Francis was born in Flores, Buenos Aires, Argentina, on December 17, 1936, entered the Society of Jesus at age twenty-one, and was ordained in 1969 with a degree in philosophy. He became auxiliary bishop of Buenos Aires in 1992, archbishop in 1998, and cardinal in 2001. He was elected as the first Jesuit pope on March 13, 2013.

Antonio Spadaro (Edited By) Antonio Spadaro, S.J., is editor of the review La Civiltà Cattolica and teaches at the Pontifical Gregorian University.

Patrick J. Ryan, S.J. (Foreword By) Patrick J. Ryan (b. 1939), a member of the Society of Jesus, became the McGinley Professor of Religion and Society at Fordham University in New York in 2009. He earned a doctorate at Harvard University in the comparative history of religion, specializing in Arabic and Islamic studies. In 1964 he began a long career as a teacher and academic administrator in West Africa, where he spent twenty-six years. He is the author of three books and numerous articles, scholarly and popular. As McGinley Professor, Fr. Ryan hopes to establish a “trialogue” of Judaism, Christianity, and Islam at Fordham.

Marina A. Herrera, Ph.D. (Translator) Marina A. Herrera, born in Baní, Dominican Republic is the first Hispanic person to earn a doctorate in Theology from a US university (Fordham, Ph.D, 1974). Her catechetical ministry began under the mango trees of her town and continued in the Archdiocese of Chicago, preparing new catechists, and later, lay and religious ministers in Empire State College (SUNY), New York Theological Seminary, Mundelein College, and Washington Theological Union. Dr. Herrera writes, and lectures on ministry in the multicultural church in the US and advises parishes and institutions about the formation of lay and ordained ministers. She has written several monographs, numerous articles, and the Manual para Proclamadores de la Palabra (2 cycles for Years A, B, C) published by LTP. She translates for Paulist Evangelization Ministries, Pro Life Secretariat of US Catholic Conference of Bishops, Pflaum, among others, and is co-editor, translator, and writer for La Fe Viva, daily biblical devotions for Creative Communications for the Parish since 2002.

Fordham University Press not only represents and uphold the values and traditions of the University itself, but also furthers those values and traditions through the dissemination of scholarly research and ideas. The Press publishes boundary-breaking print and digital books that bring recognition to itself, the University, and authors while balancing the need to publish in new formats and work collaboratively on and off campus. Its regional imprint, Empire State Editions, and location in New York City’s Lincoln Center neighborhood reinforce the university’s motto, New York is My Campus, Fordham is My School.

The translation could not have been possible without the generous donations

from Charles F. and Helen A. Dolan and Dr. and Mrs. William Baker.

If you would like to receive a review copy or schedule an interview, please contact Kate O'Brien-Nicholson at Fordham University Press: 646-868-4204, [email protected]

Edited and with an Introduction by Antonio Spadaro, S.J.